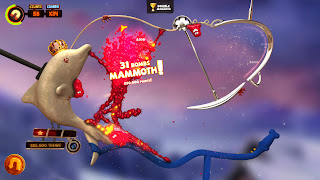 Sometimes a game just resonates with you, and it can be hard to put a finger on exactly why it does so. The Splatters when it released on the Xbox 360 was well-received by Matt when he reviewed it last year.

I know I certainly enjoyed it, sinking a good deal of time into the game upon release. I think part of it is the enthusiasm SpikySnail Games has for its titles just bubbles up to the surface in both The Splatters and Super Splatters. Either way, now that Super Splatters has been made even more readily available with its Steam release, you have no reason not to try this physics-based puzzle game, unless you just do not like the genre in general.

Super Splatters is very similar to the Xbox version of the game, though the campaign mode feels a bit meatier and I think the potential for Splatter TV and community growth is even better now on the PC than it was on Xbox Live. 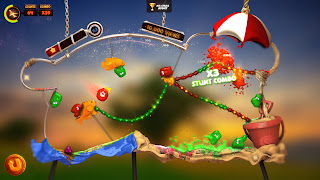 The premise is actually pretty simple, and it reminds me a lot of Worms – or if you want to reach back a bit further, Scorched Earth. The reason for this is the trajectory-based physics where you try to sling your Splatters onto explosive fireworks – setting them off. The comparison to Worms is probably a bit more apt, if only because the game exudes a sort of cute, colourful visual style that really suits it well. This goes for the vibrant backgrounds as well as the squishy Splatters as they ooze about the place. The screen has a lot going on, and while it all looks great – it can make it a bit tough at times to keep up with the action. The music and sound effects are generally charming, with the soundtrack in particular appealing to me as it just seems to go hand-in-hand with the graphics

The base objective is to set off the fireworks, but you can learn and perform tricks as well, not only helping you to meet that objective, but also to do so with style as you flip, slide and line up combination hits for big points. This helps the game’s replay value, as well as the ability to save and share out videos of your wins with other players via Splatter TV. It is also fun to go out and look at what others have done – you can learn a lot from their tactics, though the physics do have a certain degree of randomness to them that makes almost every run at a level fairly unique. Sometimes the Splatters… well, they splat. As a result, their goo goes in different directions at different speeds as a result of momentum, angle and obstacles encountered along the way. That kind of randomness could be frustrating for some people who like to have precise measurements, but I never felt like there was a level that I could not beat either that eventually a combination of skill and luck would get me me through, at any rate. 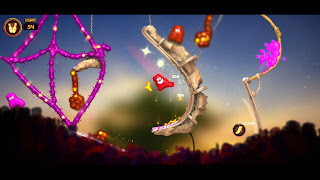 The game itself is not terribly long. If all you are planning to do is advance in level by trying to launch the fireworks, without a mind toward huge scores and lots of video interactions on Splatter TV, you will probably be done with the content in a handful of hours. That being said, I found the formula to be quite addictive, and it was easy to come back time and again to pull off crazier stunts than the time before. There is enough variety in the levels – and how you can approach each level, that I found plenty to do. This leads to a sense of experimentation here that gets fully rewarded through some trial and error