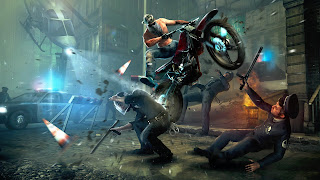 My time with Urban Trial Freestyle has left me with a sour taste in my mouth. I’m not sure if I’m supposed to have fun with it or it’s the work of a group of sadists that take great pleasure in leaving me frustrated.

If there’s one game that resembles this mess, it’s Nintendo’s classic NES title, Excitebike. That game features crazy, over-the-top gameplay that never seems to get old at the time. Urban Trial Freestyle offers six cups for players to unlock. Unfortunately it’s hard to stay interested enough to unlock all of them; The game features linear track design and gets very repetitive, very quickly. There are other games out there that use a 2D structure that feature multiple paths through a track. There’s no reason this one couldn’t do that too. 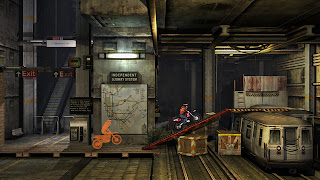 Beyond the linearity, are the broken mechanics to deal with. This is a big issue from the get go. There’s a fair amount of control that players have when it comes to the bike’s handling, which is a nice change of pace when compared to other arcade racers out there but the core physics are loose and poorly executed. More times that not, my bike flipped all the way around resulting in a crash whenever I got air time.

The layout and themes of the levels provided are amongst the most cliche and unoriginal I’ve ever witnessed. The industrial, cool guy setting is just too dudebro for me. The track designs also don’t make much sense. There’s just a cluster of random pieces of miscellaneous objects and other setting appropriate structures placed in a random order that feels more unsettling than it does anything else. 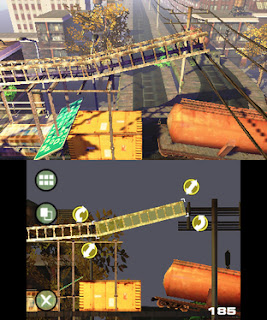 Scoring points is the main objective when earning a high rating on each track. Landing in designated areas in style, finding money, and reaching the goal as quickly as possible basically sums up the scoring variety. It’s arcade oriented fun that leaves as quickly as it came. Like an arcade game.

Outside of the actual racing building a track is the main attraction of Urban Trial. It’s a little bit clunky with no tutorial and creativity is stifled by a lack of variety in what players can do. The tracks you have made a five-star rating on are simply stripped of the objects that were originally placed and it’s up to you make an even better level than the developers, essentially.

The visuals and audio is something magical. In the worst way possible. The choppy character animations, low textured environments, and the lacking draw distance is, in other words, one big eyesore. The 3D effect can also be summed up as “tacked on” or “rushed”. If you have children, make sure the parental controls are on before they utilize this feature for the sake of their eyesight. The audio is cliche and as predictable as the setting is.

The online leaderboards, transferable ghost data, and the in-game extras are simply not enough replay value warrant a purchase. Nearly every aspect is executed poorly and should be avoided by everyone, even fans of the genre.