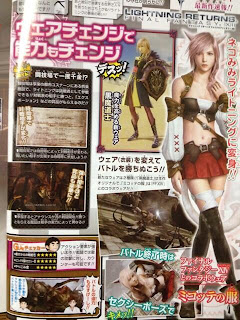 Say what you want about Final Fantasy XIII (actually, don’t; it was a damned good game if you had the patience to get past the first 10 hours), but one thing Square Enix absolutely nailed was the character of Lightning.

Here was a character that somehow managed to avoid the objectification tropes that every single other Square Enix female character had fallen into. Lightning was a very feminine character, but not physically weak, as most Final Fantasy females are (White Mage, because according to early-era Final Fantasy lore; healing is what girls do best)! She wasn’t the bubbly kind of airhead (like Rikku or Selphie… or FFXIII’s Vanille for that matter) who was pretty much useless in a confrontation but always good for a quirky catchphrase to break up dramatic moments with “humour.” She wasn’t the love interest of the main character, and so she wasn’t a delicate flower that needed protecting from the big bad (hi Aerith and Yuna!)

And, perhaps most importantly, Lightning was a female character that was physically attractive without having big breasts bouncing through the camera in every cut scene. She didn’t need to flash her midriff to get the player’s attention. She didn’t need to be the target of some stupid sexual puns. She was a character that was, above all else, designed to be taken seriously as a hero, and Square Enix had the confidence to do that without feeling the need to constantly remind us that she was a woman.

By the very low standards of the games industry, Lighting was the closest thing we could point to as a feminist icon, and it was all the more impressive coming from Square Enix – a company with a very patchy record with objectification indeed.

Which is why it is so very disappointing that one of the costumes that will be available to Lighting in the upcoming FFXIII-3: Lightning Returns is a skimpy little miniskirt-and-strip-of-material-across-the-bust number. Yes, is the costume that the Miqo’te wear in Final Fantasy XIV, and when Lightning wins a battle in this costume she’ll do the same bending-over-hey-look-at-my-goods-boys pose. Heck, she even gets cute little furry ears with her new costume, and I’ve spent enough time in Japan and walked through enough Japanese adult costume shops to know there is a market for people that get turned on by furry ears.

I’ve already seen that argument used as a defence of Square Enix’s decision, and here’s my response to that; ever consider that it is also objectification when the Miqo’te do it in FFXIV? Silly people.

Then of course there’s the argument that “you don’t have to use that costume.” After all, in FFXIII-2, you could buy a bikini DLC for Serah and no one in their right mind had a problem with that, because it was optional and such. This is true, if the Miqo’te costume is optional. Just like in Final Fantasy X-2, changing costumes will be critical to success in battle, because these costumes will have an impact on Lightning’s abilities while she wears them. So there goes that argument.

I’ve got no issue with fanservice. Given I’m a fan of games like Dead or Alive 5 (heck, I’m a fan of the Beach Volleyball games) and hyper-sexualised otaku games like Hyperdimension Neptunia and Time and Eternity, that would be rather hypocritical of me. But here’s the thing about fanservice in these games; when it’s thrown into games like Tecmo Koei and Compile Heart and Imageepoch do, it’s self referential and part of the humour of the game. It is, in effect, as much a criticism of the cynical use of sex to sell games as it is a genuine attempt at titillation.

But Lightning was never meant to be self-referential or humourous. We’re meant to take her character seriously and we’re meant to identify with her as an empowered and heroic women without the objectification that others such as Lara Croft have been subjected to. From what we know of Lightning in the first two games; while she has a powerful sexuality to her, her character would never in a million years wear something that you might fight at one of those alternative Maid Cafes in Akihabara. And THAT’S my problem with what Square Enix is doing here. They’re reducing the dramatic strength of one of the finest characters that has ever come out of the publisher, and they’re doing it for a lazy excuse to show the world that Lightning really does have breasts and a belly button, and so she’s “all girl.”

The sad story of Ashes Cricket 2013