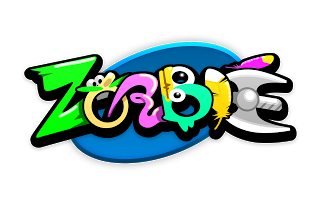 I’ve played some strange games in the 27 or so years that I’ve been playing video games, but Zorbie is one of the most extraordinarily strange titles I’ve ever come across.

Zorbie, the game’s titular hero, is an escaped convict from a French prison and like all good prison escapees, he’s got a heavy axe and he’s very hungry. Don’t worry denizens of France, Zorbie doesn’t actually use his axe on people, he only hurls it into the air to knock birds out of the sky, which he then eats, err… raw. Yes, I did tell you that this is one of the strangest titles I’ve ever played.

In arcade fashion, Zorbie is a action packed iOS title that is a perfect fit for when you’ve only got a few minutes to spare. You start the game with only 60 seconds on the clock, with the goal of killing as many flying fowls as possible to try and land your name atop the online leaderboards. But you won’t get there right from the start. Your in-game score turns into coins after either your time has run out or Zorbie wops himself upside his head with his own axe. These coins are then used to purchase a variation of upgrades, ranging from new powerups that can be found in chest periodically throughout the game, equipment that allows you to absorb a hit or even to buy additional time on the clock. These upgrades are permanent and they keep you playing for longer periods of time, which results in a better chance of standing atop the leaderboards. 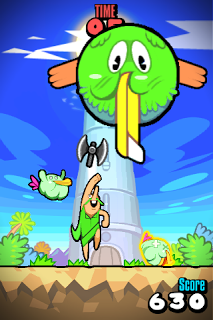 An unexpected feature for a casual arcade title such as this, is the addition of actual levels, that are topped off with zany bosses. A new level doesn’t reset the game’s timer, so only by upgrading will you ever see the game’s final level. At times, you’ll find your axe bouncing around the screen like a pinball, filling Zorbie’s stomach with feathered fowls faster than he can possibly ever chew. These moments are not only a lot of fun, but most of the times you’ll also net a lettered coin during these moments too.

Once you get enough to spell “BONUS”, you’ll be whisked off to one of the, you guessed it, bonus levels. These either have Zorbie flying to the sky catching coins with the magical powers of his mustache (couldn’t he have simply flown out of prison?) or a Breakout styled level to top off your high score.

Controls on touch screen games have a tendency to be hit or miss. Zorbie lands somewhere in between the two. Everything is handled with a single fingertip. Slide your finger left or right on the bottom of the screen and Zorbie will track left and right accordingly. Holding your finger in place will find Zorbie crouching down to start charging his axe throw and releasing at the desired power flings it into the air. At first, this seems like a cluttered control scheme, but after a few minutes it starts to click. At times though, what you want Zorbie to do and what he actually does becomes mixed up. It isn’t a control error, it’s just that the game gets frantic at times and you’ll be moving and throwing in rapid succession, making the controls easily confused.

Zorbie is one of the strangest games I’ve come across in my many years of gaming. Its whimsical presentation and slapstick humour do a fantastic job of bringing this fun pick-up and play arcade title to life. While the controls can be a bit tedious at times, the unique gameplay mechanics and bizarre wit will keep you coming back for more.

Interview: SpikySnail on The Splatters and the love of making games

The weekly discussion: Gaming on the go edition