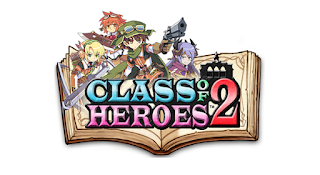 Considering today’s video game market is more expansive than that of any other time frame, it’s logical that most companies are attempting to either make their titles more accessible or streamline them for mass appeal. This is not just the case for western shooters but Japanese-centric franchises as well. Nintendo’s Fire Emblem Awakening struck gold by simultaneously providing casual options and adding tougher options for seasoned players. Class of Heroes II, however, sees it fit to make the experience challenging for newcomers and selectively sadistic for the veterans.

That’s certainly not a bad thing in the context of what this particular title is setting out to achieve. Class of Heroes II seems to be targeted at old school fans of the genre through and through. Though it may come off to some as a standard Wizardry clone, there are several unique elements to distinguish it and provide gluttons for punishment with over a hundred hours of number crunching action.
The general concept of Class of Heroes continues on from the previous title, which managed to provide a unique spin on the roguelike subgenre. Rather than playing as a silent warrior with a brooding past, you take control of various children in a scholastic setting. Before you go adventuring and inevitably get your hide handed back to you, you’ll get to “explore” the academy and take up quests or forge items (insofar as menus with pretty pictures allow one to explore). 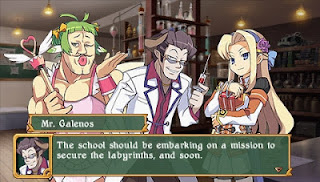 While one could argue it’s still conceptually identical to any dungeon crawler but in an educational institute, the innumerable quirky characters on campus and the more light-hearted setting make for an entirely altered feel. Interacting with them also sheds light on what is certainly one of the better translated scripts I’ve seen in a PSP game. Considering the Heroes II didn’t manage to hit its Kickstarter goal, this is all the more impressive. The dialogue localisations here are surprisingly thorough and clever, augmenting what is a fairly mundane concept – school.
That friendly sense of companionship with your peers is perhaps put in place to be juxtaposed with the game’s towering level of challenge. In the opening explanatory dialogue, one teacher named Mr. Dante makes a casual remark about being able to die even in the game’s training area. And just like the origin of the man’s name, the difficulty of Class of Heroes II is indeed straight from hell. You’ll be able to enjoy such cheerful genre conventions as permanent death, wandering around a dungeon while slowly dying of poison, praying for an item chest to appear and rectify said poison, and being killed by the chest itself. The ability to save nearly anywhere helps, but doing so without consideration can get you snagged in inescapable circumstances of death.
In case the difficulty lacks sufficient emphasis here, let’s describe the very first dungeon. Enemies come in massive swarms (sometimes in the double digits) that severely outnumber your party of six and many of these group members possess the ability to summon moremonsters. This first dungeon also introduces chests that are armed with traps. Most players would pop one open without second thought, but Heroes II punishes such hasty decisions. If you feel like guessing from over 10 possible trap outcomes you can disarm them, but like everything else in the game, this is easier said than done. 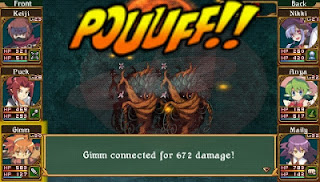 Taking place in a first-person perspective with a limited graphic interface and a general lack of animations, Heroes II has its identity thoroughly established from the outset. While it does incorporate more elaborate character portraits than those of the 80s and more polished environments, the actual battle scenes are fairly stiff. Perhaps this is for the better, as you’ll be focusing 100 per cent of your efforts on picking the best option of attack during the innumerable turn-based bouts.
In an amusing twist, cranking up the game’s difficulty in a menu option vaguely entitled “save mode” actually makes the game more palatable. While you’ll have to square off against more adversaries with greater power, they allow you to gain experience and gold at a far faster rate than the allegedly “normal” difficulty. Considering permanent death is very relevant in either mode, the game is probably easier when harder. Thus, veterans are better off playing on normal. Huh.
Class of Heroes II makes a couple other attempts at distinguishing itself from the rest of the genre. For one thing, the dungeons here are not randomized but consistent in design. You’ll still be swarmed by foes regardless of whether you know where to go and the knowledge won’t curtail wasted time to any great extent. Considering the strong emphasis on grinding away for experience points as well, taking the straightforward path may be risky. It comes off as different for the sake of being different. 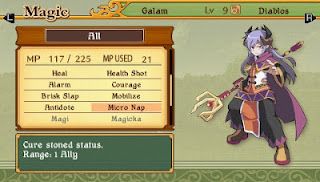 Unquestionably the most exciting aspect of the game though, is being able to design multiple adventurers. There is a wealth of different classes and races to pick from and the ability to allocate character statistic points as you see fit. Granted, there are a few restrictions on the combinations of races and classes you can use (you won’t be taking up sorcery as a gnome, I’m sorry to inform you). Still, throw in the ability to name your characters and develop your own “story” and alignment and you’ve got something a twinge closer to a pen and paper RPG than most would venture to be.
Class of Heroes II should be lauded for attempting several smaller experiments in a genre that tends to be off-putting to most. While newcomers will still be eviscerated by its difficulty, such has been the industry standard for years and at least the atmosphere of Heroes II makes for something genuinely worth struggling through.

Review: The Last Of Us. No, it is not gaming’s “Citizen Kane,” but it is awesome fun

A glimpse at the NBA 2K future