Clark wrote up an excellent review of Fire Emblem Awakening recently, and if you have not yet had a chance to read it, you can find it here. I shared a lot of Clark’s sentiments but still had a few of my own thoughts I wanted to post in this Second Opinion on Nintendo’s recent big release. 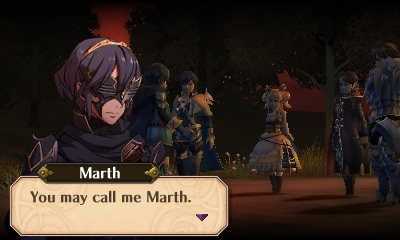 There is a lot going on in Fire Emblem, and it is all a great deal of fun. That makes it hard to figure out where to start with this title – so I will lead in with the beginning. You get to create your own avatar right off of the bat, lending a nice personal touch to the game that most strategy titles of this nature are lacking. Your character takes an active role in the story as well – not content to be a silent observer similar to your created character in games like White Knight Chronicles.

The story has loads of charm, driven by a cast of likeable characters. There are some extra options you can make use of, like having characters talk or peek in on their activities between matches. It adds to the colorful personalities – but these options are far from cosmetic. You can attain new items or improve relations between units by doing so. 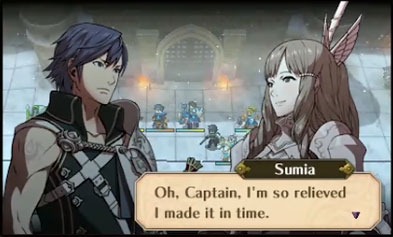 The RPG elements like gaining experience that leads to leveling which can lead to new classes are welcome here, but having units bond and become stronger when fighting side by side add another very important layer to the tactics. You can also pair units up into a single square, allowing them to help mask weaknesses and increase their strength at the sacrifice of turns. For example, my healer Lissa often teamed up with my avatar. She was weak where as he was fairly strong, so she would skip a turn while paired, but boost his stats during combat. When I needed healing, I would have her separate from the pairing and return to business as usual. There are all kinds of combinations worth exploring, like having a mage hide behind a physical unit or having one of your slower heavy hitters ride along with a flying pegasus knight so they do not get left behind.

The combat is exactly what you would expect from a strategy title like this. Units move around on a grid battlefield, taking turns swinging weapons or slinging spells and arrows with enemy units. There are usually objectives such as taking out a leader our wiping out the entire other team. The map design is excellent as well. Terrain impacts your performance, and you can find treasure on the battlefield – if you get to it before the enemy does.

There is a lot of data to consider, but Fire Emblem does an excellent job of breaking down the content so it is digestible. Things could get out of hand quickly for newcomers to the genre, but the lower screen does a great job of showing tips and displaying relevant information without having to stop and open up menu screens all of the time. Speaking of screens, the top one makes some of the best use of the system’s 3D capability to date. The cinematic movies look excellent, but even just scenes on the battlefield have a sense of depth while the artwork and text get layered on top with varying degrees of depth as well.

For fans of strategy games, you can get by without pretty graphics most of the time. Luckily here, that is not a sacrifice you have to make. Fire Emblem Awakening is a beautiful game from start to finish, with excellent sound design to boot. 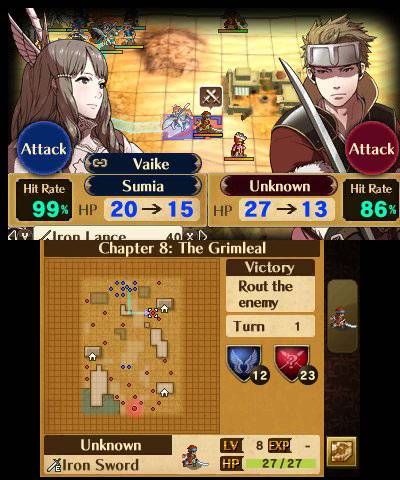 Fire Emblem has a reputation for being a difficult game as well. I have been playing with steep difficulty curves on games such as this since Warsong for the Sega Genesis years ago – and this steep level of entry was one of the reasons neither of my younger kids could get into the Wii version of Fire Emblem. One mistake on the battlefield can quickly cost you an important unit. Of course, if this is your leader, the match is over and you have to restart. However, the consequences for losing a lesser unit were also severe in the past, as that unit would be lost forever – often flushing away hours of hard work in building him or her up.

Fire Emblem Awakening offers not only varying levels of difficulty, but an option to keep that classic dead forever consequence or the ability to simply make that character unavailable until the next battle really lowers the barrier of entry for newer players. My son is a lot less frustrated with this version than the Wii one so far. If you want a brutal challenge? Then by all means it is there. However if you simply want to play the game (which is still challenging at times) and enjoy it without becoming frustrated over lost time and effort? You have that option now as well.

There are so many more things available in this game, ranging from excellent StreetPass functionality, downloadable extra maps and characters, local multiplayer, weapon forging, skill customization and more. For RPG or strategy fans, this is a no-brainer recommendation. For others who have less experience with this genre, I still feel like there is something here you will probably enjoy, which is why this is my first five star review here on Digitally Downloaded.