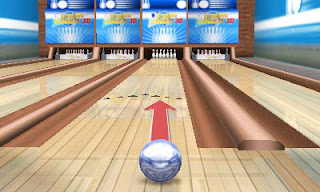 I am not terribly good at bowling, though I enjoy it quite a bit. The running joke on my old bowling league team I was on back in college was that I was our team handicap (four guys throwing around 200 or higher, and me with my rock solid 140… ish).

It is not as though I did not understand how to throw the ball – my team was made up of guys who could do so very, very well and would coach me on it. In the end, I essentially wound up tossing a sixteen pound rock down the lane as hard as I could, and generally hit the pins… badly.

Luckily I have a good deal more control over the ball here in this 3DS title, which can be found on the 3DS eShop. All of the controls you would want to see are here. You can slide the ball horizontally from side to side as your starting point, you can angle the direction of your throw and you can apply spin on the ball beforehand (Probably the worst part of my game in real life. Again, sixteen pound rock.) The final step is to swipe your stylus across the ball on the bottom screen, and this is what keeps the game varied. Once you have your precise calculations figured out to your preference, it is this that accuracy component that keeps the game from being a quick game of 300.

So all in all, the game is functional. There are a quartet of different modes such as Knockout, Arcade, League and Quick Play. They all work more or less the same – it is not as though the game itself changes any. You might participate in a league and rank up – which does unlock some new lanes and balls that you can use (There are some pretty zany ball and pin combinations; my favourite early on was the giant eyeball). However, it is basically the exact same game with different names. Some sort of online multiplayer would have been really nice here, because going against the computer is a somewhat repetitive affair after a time.

Really, just about all bowling games have that problem. Even if the game is fundamentally well-designed, it simply does not bring much new to the table. Here, at least there are some unlockables to try and attain along the way, which does help. 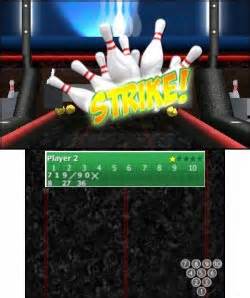 While the controls are adequate, and the game of bowling fun enough – at least for a very short time – the presentation is somewhat underwhelming. The sound effects are pretty, err… well, they make it sound like you are in a bowling alley: pins echo when hit and the ball sounds like it is rolling across wooden panels. It is what it is. The visuals are also relatively bland. The balls, lanes and pins are all represented well enough, and at least a few of the bowling balls are creative-looking.

The biggest problem I have with the game’s visuals is the 3D. That is unfortunate, because a nice 3D perspective is what could have separated Bowling Bonanza from the numerous free/cheaper mobile apps out there for phones or tablets. Unfortunately, it is bad. Not as in just jagged edges or lack of depth bad, but the sort of blurred, almost headache-inducing bad that well… sort of reminds me of actual bowling again back in college (but that is probably more due to beer than a 3D slider back then). The game is perfectly playable if you keep the 3D slider to under half intensity, but anything more than that is hard to recommend. Even then, it just never quite feels right visually – and I am someone who plays almost every 3DS game with my slider turned up all of the way.

Other than the wonky 3D visuals, there is nothing inherently wrong with Bowling Bonanza 3D. If you are really craving a quick game of bowling, the mechanics and achievements here should suffice. Unfortunately the problem is that Bowling Bonanza does very little to make itself stand out from similar titles that can be had for cheaper or for free if you have a mobile phone or tablet.

Screens and a trailer for Super Heroine Chronicle