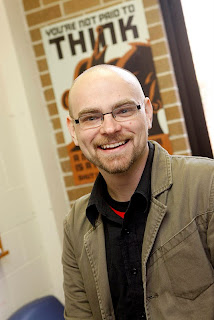 If there is one thing that Dr. Chris Moore, Lecturer of Media and Communications at Australia’s Deakin University and one of Australia’s foremost academics studying games, has learned about a crowdfunding project it’s that doing one successfully requires a unique marketing skill set than many indie game developers will find difficult to acquire.

The mammoth and non-traditional marketing and PR campaign that is required of an indie developer can seem like scaling a particularly difficult cliff face without climbing equipment, especially for those that have no marketing and PR budget.

“You do see lots of worthwhile projects that don’t get up. Not because the ideas are inferior, but simply because they have got to manage all this extra demand on their time, and develop all these additional skills really quickly,” Dr. Moore said.

Dr Moore is uncovering these challenges personally in his own crowdfunding project. The Products of Play: ‘Caching’ in on Game Play is a bid to raise some money in order to undertake research on people’s behaviour when playing games. As the Pozible (an Australian equivalent to Kickstarter) outline states: “We even have a pretty good idea about what motivates us to play, but we don’t really understand or appreciate what it is we do when we play computer games.”

“What do we value about our game-based play experiences that makes them different to other media activities like reading books and watching movies or TV, and how do these values inform our online identities, social behaviours and consumer choices?”

It’s a fascinating concept, and in fact this research would do wonders in helping the games industry understand itself, both in terms of artistic and commercial value. Unfortunately with a little under three days left for the campaign to run at time of writing, the project (despite donations being completely tax-detectable) is only about a third of the way funded, meaning it’s unlikely to hit its goal in time (though who knows. If every Australian reader of Digitally Downloaded were to go and make that tax-detectable donation to a worthy cause…).

Dr Moore said the challenge for him personally has been that the promotion of the campaign has required an entirely different pitch to what he is used to. “As a researcher I’m more familiar with the time and effort required in running a grant application, for example, which is very quiet and requires sitting behind a screen and doing lots of reading. The Kickstarter approach means I need to be on the phone and talking to media, and standing in front of cameras, and for someone with no experience in that it would have to be really daunting.”

“I’m helped that I have a background in journalism,” Dr. Moore added, but for those small development teams with creative visionaries, artists and talented coders, it might not mean anything unless they can also develop strong social media and viral marketing skills.

“The most difficult challenge for a small organisation or individual is in bridging the distance between friends and family as your immediate supporters, and then then colleagues and peers,” Dr. Moore said. “You’ve got to get it further out, and you’ve got to get it into mainstream media, and the public attention.”

Regardless of the financial success of the project, the simple act of running it has been an immensely interesting process and Dr. Moore considers that useful in his research any way.

“It’s good though because it’s an excellent teaching case for my students. We’ve been able to unpack this and talk about some of the strategies that work and some that don’t.”

Just a reminder, if seeing this research come to fruition, be sure to support the Pozible campaign!
Share this