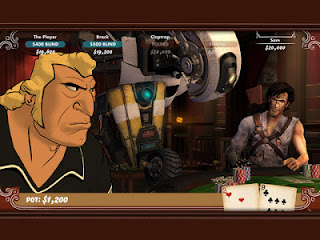 Certain crossover games seem to come under fire for having decidedly random characters thrown into sometimes unfitting contexts. If you thought last year’s Pokémon X Nobunaga or the recent Project X Zone were strange, Telltale is looking to shock you again by cranking up the weirdness to unparalleled levels.
If you’ve ever wanted to play a game of poker with Sam of the Sam & Max series, Ash Williams from Evil Dead, Claptrap from Borderlands, Brock Samson of Venture Bros., and Portal’s GLaDOS, this is the game for you. And surely everyone must have pined for this superstar cast, especially considering these characters originate from television shows, comics, and movies rather than just video games, right?
(Be sure to check out our review of the PS3 version of the game here)
I must confess that I have limited experience with the poker players here. In fact, the only two I have any notable history with are Sam and GLaDOS (the latter of which is actually the dealer). With that in mind, my perception of characterization may be inadequate.
Regardless, this is another title that is carried not by the gameplay itself but by the characters and their interactions. The banter within the group that unfolds between rounds leads to bountiful occurrences of dry humour. While some of the jokes mandate an understanding of the character’s background to fully appreciate them, having all these zany folks in one room should entertain even the most unapprised gamer. 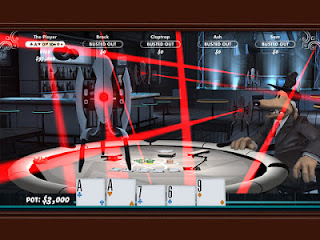 As an actual poker game, Poker Night 2 is reasonably competent. There are two variations on offer here, the latter of which distinguishes the game from the original and possibly justifies the sequel: Texas Hold ‘em and Omaha. They both function as competently as a video game adaptation of them should. If you’re a Hold ‘em purist, though, this game will feel quite exhausting. There’s no way to skip the dialogue and plenty of slowdown that a more authentic experience would forgo. Of course, why you’d be searching for such a thing in a game marketed towards fans of various semi-humorous to comical franchises is beyond me.
Poker Night 2 also does a reasonable job of explaining the rules to newcomer thanks to a basic text tutorial with the game’s trademark humour throughout. However, I wager there will still inevitably be that learning curve that takes a few hours to come to grips with. Considering the lives of your mates around the table, there must be far worse people to learn with though.
There are a few attempts to give the game actual “challenges”, but I reckon most players will find these efforts negligible. Far more interesting are the unlockable tables and decorations that seek to imitate the atmosphere of a particular franchise. For instance, using the Portal theme will make the room resemble the aesthetics of GLaDOS’ world to the point where Borderlands’ Claptrap also adopts a chromatic look. They’ll even discuss the room, making these unlockables worthwhile in prolonging the game’s true purpose – watching the characters interact. 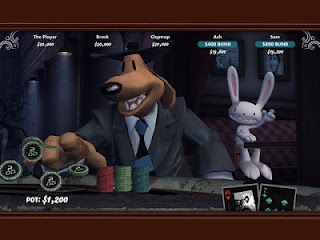 Speaking of which, the conversations do become redundant at a point. Though there is a gratuitous amount of dialogue, playing the game repeatedly will eventually lose some of its appeal as you listen to the same cheesy lines again. The group is also overtly condescending towards the player. While charming and humorous initially (particularly when you get called out on poor moves), it does grow stale when unwarranted and repeated for the umpteenth time.
It’s worth noting that this game benefits nicely from the large, touch screen interface of the iPad. Tapping options is both speedier more intuitive for this type of game than clicking or pressing buttons, perhaps making this the definitive version compared to its console and PC brethren. Sit the iPad down on the circular table at the local bar and you’ve got the most authentic experience possible (provided you have access to six foot tall anthropomorphic dogs).
Poker Night 2 is not for fans of the card game so much as those seeking absurdity and a casual experience to augment it. Those versed in the lore of each series represented here will likely extract the most enjoyment, but the success of the character relations should be adequate for the uninformed to appreciate the game’s tone.