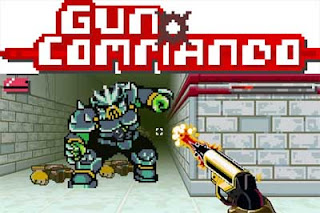 We had already reviewed Gun Commando when it hit PlayStation Mobile, but Ripstone has seen it fit to port the game to Apple’s app store service. Considering the general scarcity of old-school FPS titles, that doesn’t sound like a bad idea. Regrettably though, there are some niggles that prevent it from achieving the same appeal as the original games in the genre (and that’s disregarding the game’s already limited reach).

To be fair, that narrow appeal is actually refreshing. Gun Commando doesn’t try to be anything more than one company’s modern-day rendition of Wolfenstein 3D. The game’s presentation apes the shooters of yore so well you’d almost forget you’re playing a game released in 2013 if not for the more elaborate sprite work. The sublime comic panel transitions also clash with the game’s pixelated appearance but still manage to fit in with the overall motif.
If you’ve played the aforementioned Wolfenstein, you know precisely what to expect here. You take up arms as archetypal tough guy Jack Bennett and proceed to mow down a host of alien invaders. Naturally there are alternate weapons to work with and some nifty mechanics such as the ability to slide, but the experience is largely consistent throughout.
In terms of content, Gun Commando features a respectable 24 levels with three treasures hidden in each for additional gameplay value. Though most stages are relatively short, they lend themselves rather well to the mobile format in the process. Nabbing all the treasures isn’t primetime entertainment but at least offers an incentive to fight and explore rather than just stealthily move your way to the exit.
Virtually all technical “issues” of the Vita game stemmed from the classic aesthetics used by the game’s spiritual predecessors. The iOS version is less fortunate in the sense that touch-based controls don’t seem nearly as complementary as buttons. This is likely thanks to the lack of visual representations of buttons and the primitive nature of the game itself. Adjusting the sensitivity helps to a degree, but this is hardly optimal performance. 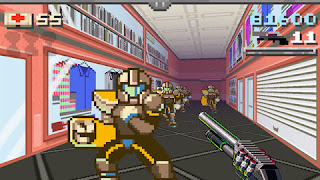 Still, much of the control grievances can be overlooked thanks to the simplistic nature of classic FPS games. Your crosshair stays stationary whilst smack-dab in the center of the screen, meaning your focus is more on fancy footwork than struggling to land headshots. The game is amusingly forgiving despite featuring such a macho protagonist.
While I cannot vouch for every iOS device out there, it seems that Gun Commando was not built with the fourth generation iPod Touch architecture in mind (despite support for even third generation devices). Slowdown occasionally hampers what should be an exciting romp through action-packed corridors. It’s difficult to nag too much given the considerable possibility that the game will be updated in the future, but it’s disappointing in the meantime since the same device that apparently chokes on pixelated backgrounds can also run complex 3D environments without a hitch.
Gun Commando has a certain niche appeal, but that audience is probably better off grabbing the Vita version at the time of this writing. The shaky touch screen controls and lack of fluidity hamper an otherwise respectable spin on an archaic genre.

Miiverse: Midori
Email me at: clarka@digitallydownloaded.net