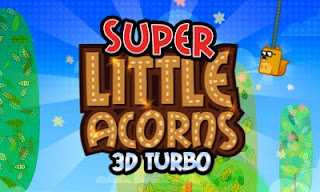 Super Little Acorns 3D Turbo is yet another in an increasingly long line of App Store to eShop ports. Of course, since the 3DS is quite a different beast from the iOS line, there’s another set of expectations associated with a title released on Nintendo’s dedicated game device. If the game’s elaborate title featuring three seemingly superfluous words is to be believed, the developers have grasped this and made the necessary adjustments aimed at a more core market.

To be blunt, it’s still largely the same experience as before but for $7.99 USD instead of $0.99 USD. While it’s true that bringing up the price downplays the amount of effort the developers put into enhancing this version, I reckon many will ultimately adopt the cynical perspective. If you’re willing to part with tomorrow’s dinner money though, you’ll get some genuinely worthwhile exclusive content for those extra bucks.
As one might assume based on its iOS origins, Little Acorns is a simple but charming 2D indie game. It deviates from traditional platformers in that gameplay takes place in a confined room. Furthermore, your goal here is not to simply reach the exit but to gather every acorn along the way. One would think the search-and-collect-based progression would be tiresome, but it manages to stay fresh for the entire experience thanks to progressively clever level design. Certain levels also have you collecting baby squirrels in addition to the nuts. These critters scatter themselves all over the stage to make your job of collecting them more challenging.
In addition to the standout level structure, there’s a consistent effort to introduce new obstacles to the mix. It’s doubly impressive considering the one button approach stays intact the entire game. 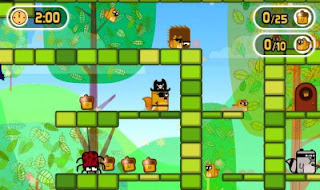 Achievements serve to further flesh out the myriad of levels on offer. Each stage contains four objectives designed with the intention of prolonging gameplay beyond your initial run. Between collecting fruit, speed running, and dispatching of all enemies, there’s quite a diverse selection to work with. While the early ones allow you to effortlessly nab all the achievements in your first session, the later ones will have you doing up to three or four separate runs.
The only technical “issue” with the gameplay lies in the sloppy jump mechanics of our protagonist, Mr. Nibbles. His leaps carry a questionable amount of forward momentum that make gauging distance and estimating mid-air manoeuvrability less than a cinch. It’s made more bearable by the fact that enemies inflict no damage to Mr. Nibbles, but it’s going to take more than a few levels to grasp the controls and even then it’s no Super Mario Bros.
Little Acorns should also be lauded for its atmosphere. Were you to merely glance at the screenshots, the game would look like your typical iOS platforming fare. Upon turning on the game, however, you’re immediately assaulted with an almost singular, cartoon-esque vibe. Though many titles out there have various cartoon-esque traits,  the visuals and music of Little Acorns work in tandem to create an experience that surpasses most others in terms of dedication to a theme. Considering the otherwise plain aesthetics, this is quite welcome.
Personality also shines through the season system utilised here. Since the game’s story (if you can call it such a thing) revolves around Mr. Nibbles hoarding acorns for his family, it makes sense that you would get to see them. Completing a level will present you with an informational screen that also contains a visual representation of how many acorns you’ve collected throughout the entire quest. It’s a clever approach to provide the player with an overarching sense of accomplishment rather than the mere satisfaction of beating a stage in isolation. Combined with the achievements mentioned earlier, Little Acorns does a lot to make you forget that you’re playing a time waster. 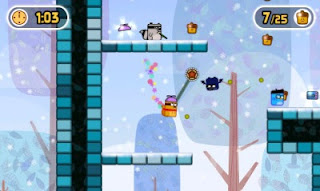 So, other than the verbose title, what makes Super Little Acorns 3D Turbo an improvement over its predecessor? The game’s “super” gameplay quality was already established on iOS. It’s certainly not the 3D part, as this game, like 90% of them on the system, fails to buck the trend of worthless implementation of three dimensions in a two-dimensional game. Nay, it’s the new turbo mode that takes the content of the original game and expands it twofold with extra challenge. One could also make the argument that the tactile controls offered by buttons make for a superior experience, but I’ve honestly never had difficulty playing platformers on iOS anyway.
As an aside, you also get to dress up Mr. Nibbles with costumes you collect by progressing through the game. These honestly serve no purpose whatsoever, but there are so many ridiculous combinations you’ll feel obligated to try them all throughout the journey. There’s also no in-game charge for unlocking them this time around, which makes them that much more appealing.
Super Little Acorns 3D Turbo takes a decent platformer and polishes it with new features and additional content. It doesn’t reinvent the wheel in the process and some will be overly judgemental about the price tag, but this is a worthwhile purchase for those seeking long-term gratification dressed in an accessible package.

What an awesome infographic