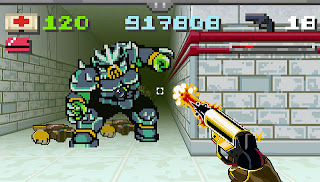 I have to hand it to Ripstone. Despite minimal support for the Vita by the broad market, Ripstone continue to publish high quality games from the platform. Games such as Knytt Underground and Big Sky Infinity have been full-blown PSN titles and played by many; they were PlayStation Plus freebies.

Green Hill Games’ Gun Commando is a far smaller scale release for Ripstone to back, and you’ll need to drop into the PlayStation Mobile section of the PSN to pick it up. It’s worth the trip though, because this is an old-school FPS with a real sense of style about it.

Anyone who has played Wolfenstein 3D or the early Doom games will know immediately what to get with Gun Commando. Awkwardly-animated enemies, small enclosed corridors which all look similar enough that it’s easy to get lost, garish colours that scroll by jerkily; the authenticity that Gun Commando shoots for is admirable, even if it’s a style of game that has long been antiquated. Far from being frustrating though Gun Commando’s levels are brief and the action itself is smooth enough that its presentation is merely kitsch. 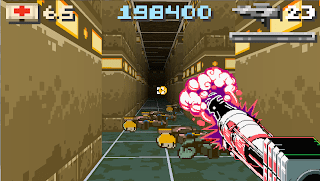 In fact, given the sheer skill that is required to master modern FPSer games it’s really nice to be able to step back and run through levels without having to look up and down, duck behind cover, deal with AI team-mates or worry about much else than the high score. Gun Commando runs at such a clip that it’s pure run-and-gun bliss.

This deliberately retro action is broken up by cut scenes that are expertly drawn and straight from modern comic book art. So it’s not that Gun Commando’s retro aesthetic is a mere consequence of the developer’s lack of skill for the craft – as too-many retro throwbacks are – but rather it’s a deliberate design choice. Coupled with the imaginative level design and some moments of real difficulty and it’s hard not to get drawn into the game.

Gun Commando is a brave game. This is a genre which, unlike 2D platformers, has not aged well at all and as much as we all respect what Wolfenstein 3D achieved, it’s not a game we necessarily want to spend hours playing through again. Ripstone and Green Hill Games have shown us that even today we can have fun with this dated design.