In the early days of game development, economic simulation games tended to focus in on one law of trading alone; buy low, sell high. Somehow, this incredibly simple (and often incorrect) economic theory drove dozens, if not hundreds of games, and turned many of them into genuinely compelling experiencing.

Nostalgia for that style of game is what 16Bit Trader tries to capitalise on, and it must be said that it is reasonably effective at doing that. Despite being limited, even by the genre’s standards, this game’s presentation, sense of humour and effective execution sees it through. 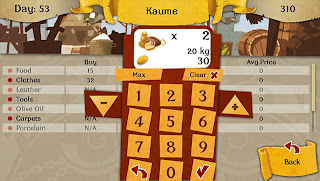 The plot is barely there, but that’s just as well because beyond that introduction which states that you’re out to get revenge on a dastardly criminal by earning a lot of money (yes, really), the game then leaves you to your own devices. You’ll travel from city to city, dealing with the occasional mishap but for the most part increasing your personal wealth by buying material at a low price and then selling it where demand (and therefore returns) is higher.

Unlike a modern take of this well-worn gameplay style (see: Port Royale 3), 16Bit Trader doesn’t extend itself far beyond those most basic mechanics. Players can hire mercenaries to reduce the threat of bandits and so forth while travelling from city to city. As the player’ reputation grows, more lucrative goods and some extra cities open up for exploration. At the local tavern players can buy beers for some of the locals to grab additional bits of useful information. Finally, most towns have some citizens that are in need aid – these optional quests have some minor awards and typically involve travelling to specific points on the maps to drop objects off or pick up other items. 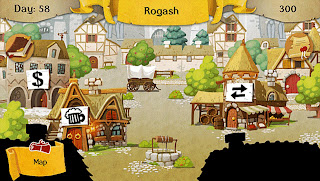 Unsurprisingly this whole process gets repetitive with extended play sessions and it’s very menu heavy with virtually no animation to break up the text boxes and town graphics, but in shorts bursts it’s a near-perfect PlayStation Mobile title. The presentation of those static images is charmingly bright, and the interfaces are usefully laid out. Often these games contain so much data that they need to be the only game that a player is working on; put it down to play something else and trying to come back to it is a nightmare of working through numbers and more numbers trying to figure out what your current strategy. But with 16Bit Trader that’s not a concern and this game is very easy to pick up and play in between the meatier games.

Casual game it is, then, but it’s also cheap and microtransaction free. This game is for people that have a fond memory of hours spend in primitive trading economic games back in the good ol’ days, and that’s not necessarily a bad thing at all.