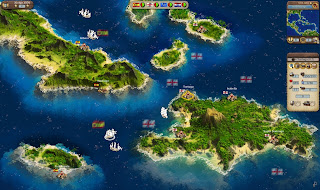 Port Royale 3 made me glad that I still play games. It is so different to the modern games that focus on instant gratification that it must have been a real risk to release it on consoles, and if there’s any justice in the world this risk will pay off, because while Port Royale 3 is not an excessively complicated strategy game, but it is a slow burning simulation that is so very rewarding over long play sessions.

There are two ways to play Port Royale 3 – either by aggression (buying up battleships and exerting military force on the 50 or so towns and cities around the Caribbean), or by trade (buying up resources from towns with plenty, and trading them to towns with shortages for profit). Both play styles are slightly different, but either way the game features a reasonably deep level of strategic depth; you’ll need to build up towns to provide resources, fend of aggression from pirates and enemy factions, and expand your own empire by taking over towns, whether through smart economics or military dominance. 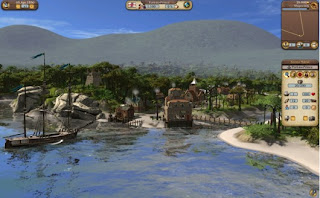 There’s a political environment at play between four different nations to deal with, and each town also has a popularity rating that shifts depending on whether you do it favours, or exploit its people. In other words, there’s a lot of spreadsheets running in the background of this game. And for that the “trader” version of the game is a little more fitting with the theme. The “adventurer” (or aggression) option is still fun, but a little shallow when you consider there are games like XCOM out there for a military strategy fix.

The setting is great fun – the pirates and corsairs era of the Caribbean is an exciting, exotic world of intregues, and the game takes full advantage of it; there are treasure maps to find, trading routes to set up to move rum, cotton and bananas around, and dangerous waters prone to hurricanes and pirate fleets. Towns are susceptible to the plague and/ or starvation and while there’s a few cities, the vast majority of this game is a world ripe with opportunities for plunder and exploitation. The default pace of the game is quite slow, as the later parts of the game will pull your attention in multiple directions at once, but it’s possible to speed things up nicely for the early parts of the game. 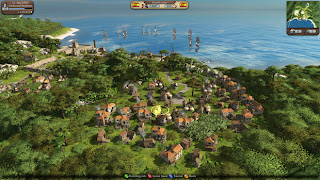 In terms of presentation the game is very basic – and that’ll probably kill its market potential, unfortunately. The maps and cities look nice without being flashy, and the music isn’t memorable, but it fits the game’s setting. What is impressive, though very slow to realise, is the town development itself. After a couple of hours of familiarising yourself with the basic mechanics of the game, it really opens up allowing you to build farms to produce goods and houses to grow the population size. The game gives players a huge amount of space in each town to add buildings, and watching an empire across land and ocean grow slowly-but-surely is a rare treat in the high-action modern games industry.

Another great touch: there’s no online multiplayer shoehorned in unnecessarily. It’s the kind of just-one-more-turn strategy game that sticks to what it’s good at – a campaign and a freeplay mode – and that’s enough to have you playing until the early hours of the morning. I love it for that.

PlayStation Plus the big “weapon” for Sony’s next-gen hopes