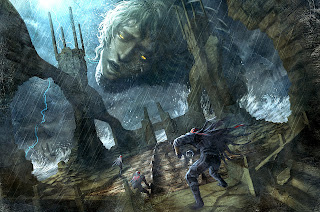 Yesterday was a pretty busy day for games news – as usually happens when Nintendo hosts a Nintendo Direct show.

But that’s not all. Over on the humble Vita console Sony quietly released a demo for the game that single-handedly kick started the console in Japan. Soul Sacrifice could have just been another Monster Hunter clone. It could have, but it’s not. Based on the  (surprisingly meaty) demo, this game really is the Vita’s killer app.

What’s immediately obvious about the game is that this game doesn’t have the light sense of humour that Monster Hunter does. Soul Sacrifice is dark and menacing, brooding and violent. It’s more story orientated than Monster Hunter too, so, while the structure of missions is similar and the scale of the big boss battles is equally impressive, there is greater context to what you’re doing in this game.

Enemy design is universally brilliant and though missions are short and sharp, they’re also very (very) intense. Soul Sacrifice has bite and the combat has impact. At the same time it’s spectacularly intelligent, with all kinds of systems at play that will allow players to really customise the kinds of heroes they develop.

The online works nicely too, and this is perhaps the first Vita game that will end up with a community large enough to sustain it. Atmosphere, challenge, layered combat and a mission structure perfectly suited for the portable form factor… as far as I’m concerned this is the Monster Hunter killer.

The purpose of this piece isn’t to go in-depth with the game. I don’t want to spoil the experience for anyone (and it’s a free demo, so just go try it for yourself). Rather, I would love to hear what other people have thought about their time with the game. Has Soul Sacrifice won your soul?