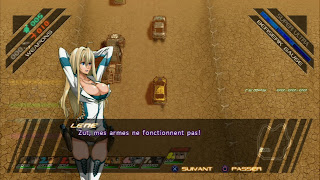 I was disappointed with Fuel Overdose. When I’d discovered that I would be the one reviewing it, I naturally read some impressions about the game to get a feel for how it matched people’s expectations. So I went into it expecting one of those games so bad they’re kind of amusing (as long as you didn’t pay for it). Like Superman 64 or Big Rigs.

What I got was a game that was painfully average. Not terrible, but not worth buying thanks to a serious case of “great idea broken execution.” I didn’t need to give Dr. House a call to diagnose that condition (I’m far better at being nasty and cynical than he is anyway… and I’ll probably end up in prison too, but that’s a story for another day). No, the problems that put this game on life support are evident within ten seconds of play. But by the same token I haven’t deleted this off my PlayStation 3 yet. That says something, I think; underneath that shocking exterior is a game that is weirdly compelling once you figure out how to fight with its horrific controls and lobotomised AI. 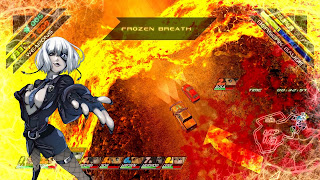 Rather than go into a grand explanation of the game’s faults, for their are many and if I did that this review will start to read like Dr. House’s dialogue in a typical episode of that wonderful, wonderful show. So instead let’s just describe those ten seconds I described above.

First thing is naturally to download the patches when first booting up the game. “Oh good,” says I, “this means they’ve fixed those issues that the hasty, silly critics from before who beat me to the review mentioned in their reviews.” Yes, I get petty like that when people beat me to reviews.

I’m not sure what they actually fixed, but I now feel very sorry for those aforementioned game critics. You are true heroes, good sirs and madams, for playing through the mess that must have come pre-patch. So anyway, after that significant patch comes the game’s menu. All good so far; I selected a single race just to test things out. I didn’t bother with the tutorial because I knew the controls from my previous reading. It wouldn’t have mattered anyway, as I soon discovered. 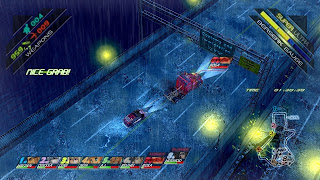 With that I was taken to the character select screen. This would be OK except one of the character profiles included the image of a woman in a pose that could only be explained as the most unnecessary use of doggy style in a game in the history of gaming. So I selected her. The sheer audacity of the game’s artists impressed me, see.

And it was time to race! All the cars we lined up, and right in front of me was an impressively-large truck. Ready, set, GO! The AI-controlled truck immediately turned right where there wasn’t a right hand turn and crashed into a wall. Leaving me no room to maneuver around.

That ten seconds became indicative of my entire experience with Fuel Overdose. Brain dead AI let me come from last place to a win on the final stretch because all the AI folks had crashed into one another or nearby walls. I was in last place and needed that Steven Bradbury-style comeback because the ridiculous steering and horrible collision physics meant I would often crash into walls or be turned around 180 degrees after a slight tap with an object of some kind. A swirling “dynamic” camera didn’t help here either. One moment I thought I was driving forwards, Micro Machines-style. The next moment the camera had turned the game into a side scroller. 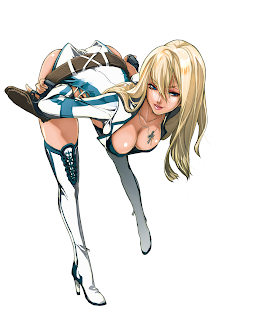 Once you get past all that, there’s some amusing little quirks about the game, including a fun weapons system and a really neat lasso system that allow players to extend a cable that latches onto a post on a tight turn, whipping you around with a really neat speed burst at the end. Mastering that feature alone makes this game almost worth all the pain. I want every kart game and arcade racer to have this exact feature from now on.

Is it enough to save the game? Of course not. But it’s proof that the developers had their hearts in the right place. And that makes Fuel Overdose far more tragic than the guys that call in shovelware just because they can. This game wanted to be great. Perhaps, no, hopefully, it makes enough money that Fuel Overdose 2 can be a properly-realised project and execute on its potential.