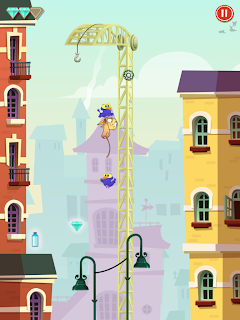 It’s the age-old love story. Cat falls in love with cats, by collecting diamonds, balloons and milk to win her over. Mittens is the latest game in a long series of physic-based titles on touchscreen devices.

Mittens comes from Disney, who also gave us Where’s My Water? and Where’s My Perry?, two other physics-based game. Unlike Disney’s other two titles though, Mittens doesn’t offer the same level of fun and incentive to keep you playing for hours on end.
Mittens, the game’s titular hero, sees you moving along levels to reach whatever your love desires. The game does a great job of slowly introducing new elements, and eventually in the later levels combining them to create a diverse challenge. Birds can be used to move across levels, whilst when a window opens or an ape blows up his belly, Mittens will bounce off in the opposite direction.
The level design is surprisingly creative. Each level set is made up of 24 levels and each of them packs on layers of charm. One group of levels sees Mittens go to the circus to collect balloons for Mia, his one true love; adorning the level’s with trapezes, rings of fire and clowns to bring these settings to life. It’s great design (to be expected from Disney – ed) and should be commended. While there’s little sound in the game, mostly ambient noises from the environment, it is fine as it is, but it would’ve been nice to have had something playing along in the background. 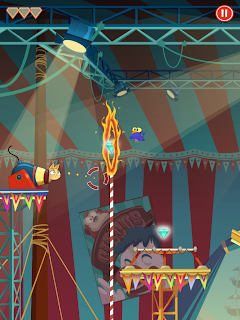 The main problem that emerges in these levels is the timing. Pretty much any puzzle-based physics game relies on timing to complete the puzzles. Not only does it rely on timing, but it also relies on precise physical inputs as well; in both of these aspects, Mittens fails to hit the mark.
Many of the levels require pinpoint precision when it comes to collecting diamonds or moving from platform to platform. That would be fine if I felt that I was in complete control the game. There were many occasions where I would tap in the wrong place – mere millimeters from where I meant to tap – only to find myself having to replay the level over again. After this happened a few too many times during a single play session, I’d simply turn off my iPad and walk away because I felt cheated; this is not a good thing for a pick up and play title.
I’m normally not one to criticise touchscreen controlled games. I enjoy it when a game that can be played with physical buttons can also be played just as well (if not better) with a touchscreen. But when you get a pick up and play puzzle game that fails to offer the accuracy that is typically associated with touchscreen controls and the game is dependent on them being so, it puts a sour taste in my mouth. It is a shame too, because everything else in Mittens is really well done.