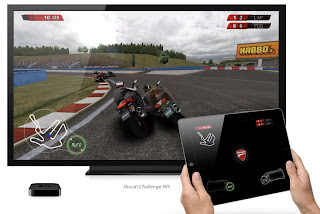 It looks like it is finally happening – if the rumours are true, Apple is set to release an official game controller. This controller can be expected to be designed as Apple’s answer to the TV console – playing games through an Apple TV via iPad or iPhone. If it’s true, this is something the other console manufacturers need to be really worried about.

Apple has a massive developer ecosystem and most of the large developers and publishers are now investing big in the platform. EA, Square Enix, Bandai Namco and Activision have all put big bets into iOS development. Furthermore, these games are being sold for a fraction of the price of a full retail game. FIFA games on iPad are less than $10, while at retail it’s $50 or more. The iPad game might not be quite as good as the console game in terms of visuals or physics, but they’re workable and for many people they would rather five games for $50 than one, even if that one is the better game.

That’s why developers and publishers are investing so heavily in the platform – large numbers of players are on there now.

The problem, as Apple critics have often claimed, is that these games are not as good as the “proper” console experience thanks to a lack of physical buttons. Not being able to play your shooters with dual sticks and your platformers with full analogue control does result in an inferior experience for many players.

There have been attempts to add real buttons to the iPad/ iPhone experience in the past. Small hardware studios have created things like the iCade controller and the 60beat Gamepad. These work as intended, but they have struggled from the simple fact that they haven’t been endorsed by Apple. Without that endorsement the software support for these controllers have been patchy, and all-too-easy to ignore by consumers as a result.

But that would be different if Apple was the one who produced the hardware. Developers and publishers would know that this product would be supported at scale and would find its way into enough homes that it becomes worth the investment to include controller support in the games. Unlike the other hardware manufacturers, Apple is also in a position to act like Sony, Microsoft and Nintendo and actively engage with the publishers to provide financial and marketing incentives to support its controller.

If you’d played some of the better iPad games over AirPlay, such as Gameloft’s Modern Combat or Firemonkey’s Real Racing 2, you’d realise that these games do offer the full console experience in every way but for the lack of buttons. With this new hardware peripheral we will have an effective fourth home console fighting for our time and money.