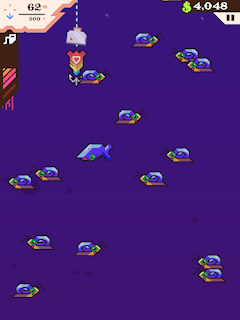 Writing about Ridiculous Fishing (let alone reviewing it) is awkward to say the least. On one hand, developer Vlambeer (of Super Crate Box fame) would not want me to bring up Ninja Fishing – but to be honest, I could live without mentioning it – Gamenauts’ all-too-successful clone of Vlambeer’s original browser game.

But after playing all three games back-to-back, it quickly became clear that Vlambeer not only puts its best foot forward when it comes to its games, but genuinely respects its audience when it comes to asking them to pay for its products.

So what is so ridiculous about fishing? Well, Ridiculous Fishing is built around the same three-phase gameplay that was set down in Radical Fishing, its browser-based prototype. First, you toss your fishing line into the ocean, moving left and right to dodge oncoming fish. Once you hook something, you retract your line, this time attempting to catch as many fish as possible. And as you fling your fish out of the water, you pull out your favorite gun and shoot them, showering you with guts, blood and more importantly: money.

It indeed lives up to its name. While its predecessor relied on simple mouse controls, Ridiculous Fishing maps the fishing line to tilt controls and it works wonderfully. It’s responsive, fluid and unlike Ninja Fishing, completely free of any delay or lag. Shooting on the other hand is performed by simply tapping the screen as the fish soar through the air. Simple firearms like pistols and magnums are controlled by single touches, while automatic weapons like the uzi or minigun are fired by holding your finger (or two, for duel-wielding) on the screen. 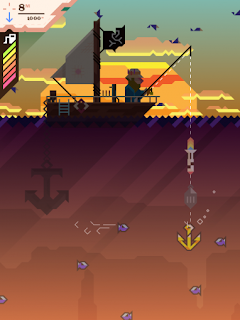 When it comes to most other mobile games (including that one specific example I mentioned earlier), you’d be able to buy all the different power-ups, guns and outfits through the use of in-app purchases, rather than earning in-game money. Ridiculous Fishing eschews the whole concept of microtransactions, instead forcing (and I use that term lightly) you to embark on countless fishing expeditions to earn your keep. The difference is Vlambeer has carefully crafted a game where repeated play actually serves a purpose. Sure, shelling out a few dollars would speed up the process considerably, but with each line you cast, each fish you catch and each round you fire, you’ll find your technique improving. Unlike many other games and genres where grinding is used as a way to pad game length, it serves a purpose here; the balance between time spent fishing and money earned is near perfect.

While the entire premise of ridiculous fishing might seem simple, there’s a lot going on behind the scenes that often makes me think that the game is getting the better of me. There’s no traditional story per se; most of the dialogue is exchanged through Byrdr, an in-game social networking service for fishermen and… birds. It’s backed up by a rather bizarre ARG through which Vlambeer has sent out embarrassed emails posing as the CEO of the real Byrdr. I don’t fully understand all of it, but it’s easy enough to enjoy as a spectator. 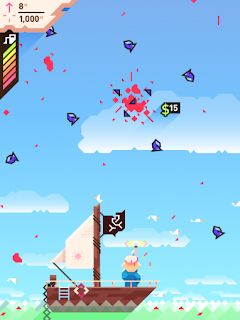 It all culminates together to suggest that perhaps the game is too ridiculous for reality. A man who hunts fish with varying firearms, purchases guns and clothing from the middle of the ocean, ties hair-dryers and toasters to his fishing lines, and talks to birds from his wooden tablet (which, in a nice touch, displays the current time and battery life of the iOS device you happen to be playing on). After I bought an antigravity device and bought a jellyfish hat, it finally clicked that maybe this is all happening in his head. While the mysterious nature of fisherman Billy might be a bit much for some, it adds a layer of abstract quality that renders all other games about fishing (*cough* Ninja Fishing *cough*) lacklustre by comparison.

The game’s art style also transcends what you might call ‘normal’, with every creature, character, and background composed entirely of 45 and 90 degree angles. The artwork is fantastic to look at, which is an accomplishment for a game that takes place entirely on a boat.

While I’m sure we would all love to live in a world where shameless clones don’t exist, in this case, it gave Vlambeer a purpose. And when all is said and done, Ridiculous Fishing is better than it would have been, as it has a pre-existing game to compare itself with. It eliminates any weight that the phrase, “good artists copy, great artists steal” might have had left, and shows that the best way to see how creative and original a game can be is to look at the games that have copied it.

Square Enix CEO falls on his sword; why this is sad but positive news