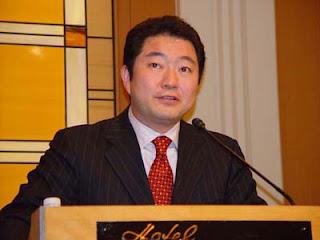 Square Enix is about to announce some horror results, and the company’s CEO, Yoichi Wada, who has been in the role since Square merged with Enix in 2003, will be leaving his post.

In a significant company resturcture that will cost it $105 million alone, Wada will be replaced by former Taito director Yosuke Matsuda. The company will also be selling off its free-to-play games to a new startup with a lot of venture capital.

The company has had lower than expected interest in its digital content and is largely blaming a lack of momentum in console gaming for the loss.

The company has had some successes in recent years – consider the massively popular Tomb Raider reboot and the upcoming Thief reboot. Aside from its western-published games under its Eidos brand, however, I think many pundits would be happy to claim that Square Enix has largely lost its way. It failed to convert its most valuable franchise, Final Fantasy, into a major presence on the PlayStation 3 and Xbox 360, and it has run into numerous controversies in its efforts to develop a mobile presence.

It’s hard to entirely blame Wada for this however. It’s been a difficult time for all game developers and publishers in Japan, who are rapidly losing marketshare in the west to shooters and other such games that they have limited experience in or understanding of. Within Japan itself the console market has struggled this generation, leading to a challenging environment for the likes of the Final Fantasy franchise.

Despite this, I can’t help but think it is high time for a new executive to take the top job at Square Enix. Taito’s director also strikes me as a great choice. While Taito’s games have never been prominent amongst Square Enix’s stable, Taito has also been, quietly, the most innovative of all Square Enix’s subsidiaries.

Consider Groove Coaster, or Space Invaders Extreme. If there is one thing Square Enix desperately needs that its rivals all have right now is a fresh spirit of innovation and creativity. I would expect Matsuda to bring that into the company.