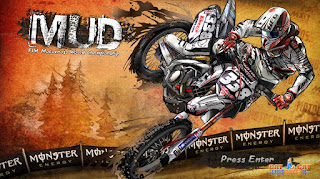 MUD – FIM Motocross World Championship (MUD) is the most comprehensive videogame rendition of the sport that’s ever been delivered to its fans.

All three of the official circuits (MX1, MX2 and MXoN) are featured here, with each competition offering not only its authentic rosters, but impressively, its tracks as well: 84 riders, 32 teams, 16 nations and every single track from every circuit are all packed onto this one single disc – not to mention a truckload of licenses from the likes of Monster Energy, Rockstar, Kawasaki, Honda, KTM and many more. Most anything that fans could possibly ask for is all packed into this one title. Or is it?

It doesn’t matter how many licenses, tracks or circuits that are in a game, because if the gameplay doesn’t deliver, it’s all for naught. For the most part, MUD does deliver once you twist the throttle and get down and dirty in the mud though. There are numerous surface types to contend with and as races progress the terrain deforms. This isn’t merely a visual gimmick either, seeing how the ruts created from the tracks’ deformation strongly affects the bike’s handling. Softer terrains deforms near instantly and learning to control your speed with precise throttle and braking control to take advantage of these ruts is absolutely paramount to winning races. You’ll also make use of an aerial motocross technique called the “scrub” too. This is as simple as pressing the X button right before launching off of the top of a hill and going airborne. If the manoeuvre is held long enough – without crashing – you’ll gain a speed boost upon touching the ground. 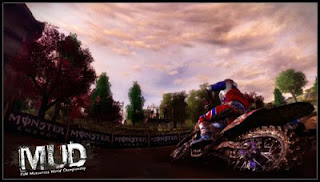 MUD rides a line that’s somewhere just on the arcade side of the arcade/simulation spectrum if you’re in the game’s Official modes, which is where you’re racing through the three official circuits. This is the game’s main mode and where you’ll likely spend the majority of your time in single player. It’s in these modes where the motocross racing here feels at its best – as well as online, but I’ll get there in a bit – but the same can’t be said for the additional World Tour mode. In this mode there are four off-the-wall characters that you’ll take through a long stretch of races of varying types.

The problem here is that a 1st place victory on any event barely allots enough points to unlock the following event, meaning that the funds needed to purchase upgrades, equipment, tricks, etc., will come from racing previously completed events. If you caught the “tricks” just then, those are used in the Trick Battles found within the World Tour as well, but the tricks are clumsily executed via button combinations – and can’t be performed whilst flipping for some reason – finding this mode coming up short all-around. It’s a shame really, because it would’ve been a nice contrast to the more simulation styled Official modes had it been handled properly.

Taking MUD online for the first-time found an unexpected and welcomed surprise. The online racing found here is fast paced, fun and free of lag. Instead of finding ourselves being subjected to constant annoying crashes caused by rival players, they become a sort of ghost once you come into contact with them. While this might seem strange at first, it’s surprisingly for the better, because it keeps the best player on the top and the racing intensity high. Currently, the online lobbies are filled with racers and if you want to prove your motocross skills online, you’ll surely be pleased with what MUD has to offer. 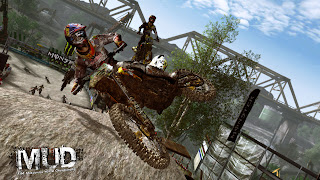 Graphics and sound are both, well… a bit muddy. A drab graphical approach wasn’t unexpected, nor was the hard rock soundtrack, but it’s the complete lack of flair that’s most surprising here. The menus are uninspiring and even with the truckload of official licenses, there’s little here outside of the actual racing that’s worth getting excited about. It’s quite obvious that the game was developed with a limited budget and time restraints: minimal rider movements, limited bike physics, etc, are the end results of this. I still can’t shake the feeling that had the developer Milestone – who’s a well-respected developer of racing titles – spent its time further polishing the Official modes and basic gameplay elements instead of implementing the World Tour mode, the game would have most likely fared much better for it in the end. As it stands, MUD is a fun motocross game that shows real promise in some aspects, but outside of genre fans it’s hard to recommend.
MUD – FIM Motocross World Championship brings the white knuckled motocross action to home consoles with more authenticity than any videogame has ever achieved before it. Featuring all three circuits and a truckload of authentic tracks, riders and locales – there’s plenty here for motocross fans to dig into. For a title with so much promise though, it’s just a shame it gets bogged down in the mud at times.

Trailer: Killer Is Dead; Goichi Suda is back to doing what he does best