What we have here is a platforming game with some shooting and puzzle elements baked in. The platforming itself handles well enough as I did not find myself missing my jumps very often at all, and the generous checkpoints left me feeling like I could experiment without feeling like I was wasting a ton of time replaying the same lengthy sections time and time again.

There is also a basic shooting mechanic where you fire horizontally at your opponents who pop in and off the edges of the screen as you advance. The levels are in some ways somewhat linear, but you can travel back and forth as needed and there are some nice puzzles built in along the way to help keep things fresh. Sometimes you just need to beat a certain enemy to get his key card and other times you need to find a crate that you can push up to a tall wall so you can get out of the pit you are in. None of the puzzles really taxed me too much mentally, but I appreciated that they were integrated in such a way they did not feel like they were slowing down the gameplay.

The game itself plays well, though the controls can feel a bit stiff at times and there was one control scheme choice that struck me as particularly strange. You can crouch by pressing down or by pressing the circle button, and every now and then in the heat of battle, I found myself crouching and then rolling – sometimes out of trouble and other times into a worse situation. It would have been nice to see a bit more variety in the combat. The action itself was never really dull, but a bit more variety and slightly better controls feel like missed opportunities to take a really good game and make it really great. 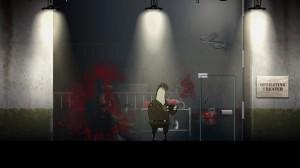 I touched on the humor in the introduction, and Rocketbirds oozes both humor and style throughout its excellent presentation. The sound effects get the job done – without more variety in puzzles and combat, there is something of a limit to the number of sound effects needed to compliment things. The music however, is very catchy. Better than the music is the visual style, which is awesome. The detail is excellent, slowdown is never a problem and the cut scenes and overall style are just entertaining.

I think that sums up my overall feelings about Rocketbirds so far. You push boxes, jump from one platform to another and shoot the bad guys (bad birds?) that get in front of you. When you look at it through that lens, it seems like something we have all done before time and time again. However, the game itself is fun and the presentation keeps you engaged as long as you do not mind a bit (or a lot?) of silly in your game, making it easy to recommend.

The PlayStation 4 is incredible, but are too many gamers going to miss out?