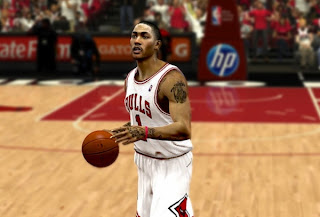 After a couple of hours with NBA 2K13 I realised how little I know about basketball.

Here in Australia it’s not exactly a sport that people watch on TV. With minimal experience in watching the sport, I haven’t been able to passively pick up the complex strategies and properly understand the subtleties of the flow of the game. Sure I know the basic rules, but as my win: loss record on NBA 2K13 shows, that’s no longer enough with sports games. Now you really need to understand how the game works for success.

It’s a stark contrast to my experience with the likes of FIFA, NHL and F1 games, where I do know the strategies that are required to beat the AI. NBA 2K13 does not allow players to choose the difficulty of the AI, and unless you have got a solid grasp of the game of basketball – not just the rules – that AI sets a very stiff challenge. If the difficulty options were in there, they are buried deep enough within the options that I never found them, and after a couple of games I did not necessarily care. I was not winning, but I was learning, and I was having a good time doing it. Without the temptation to set the difficulty at a manageable level, I have been forced to pay attention to what I’m doing, and that is a reward into itself. 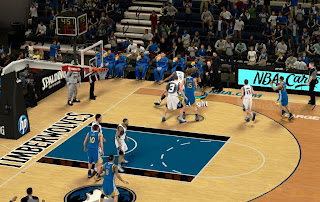 It’s impressive just how far you can get into the game too. There’s continually updated rosters, robust social features and linked iPhone applications to continue the experience outside of the main game. Your profile is saved to the Cloud, and accessible anywhere as well, which is a nice touch and will hopefully carry on to the inevitable release of NBA 2K14 next year. There is also a nicely detailed career mode to join with the team exhibition matches and online play. Unfortunately just about everything in NBA 2K13 requires players to be online for all the features to work as they were intended. Even if you are not playing online with anyone, the game expects you to be online to sync with your profile and download updated statistics and upcoming matches. Without that connection, it’s a shell of a game – playable, but ultimately disappointing for people who don’t have such ready access to fast connections.

On the court the game has tight controls and uses the buttons around the GamePad in a comfortable way. With the right hand analogue stick now being used for controlling the dribbling, it is possible for experienced players to nearly perfectly recreate what they see on screen. That said, as with the difficulty there are limited controller customisation options. EA’s NHL series is perfectly playable without being an expert in ice hockey because it’s possible to dial the controls right back to literally a two-button system. With NBA 2K13 players are simply going to have to learn to play the way the developer wants them to. 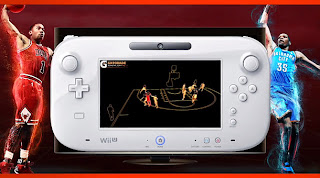 Perhaps these differences in design philosophy are due to EA’s games being friendly to offline players, while NBA 2K13’s persistence with online features meaning that players need to be playing on an even field, but those differences are stark. NBA 2K13 is not even close to accommodating to new players.

More disappointing is the lack of optimisation for the Wii U platform. The GamePad is used to either display player statistics, or give people a guide to how much energy each player on the court has. Neither is especially interesting or useful (and indeed the experience with the game is not changed in any meaningful way if you don’t look at the gamepad at all while playing), and even when you do want to look at the screen it has the habit of flicking back and forth between the statistics and the energy guide so quickly that it is impossible to take in any information. 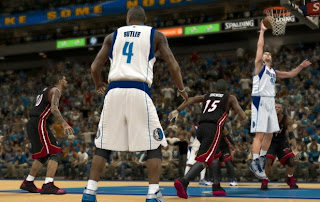 It is a wasted opportunity. It would have been so easy to include some strategic play options on the touch screen which could have significantly enhanced the on-screen gameplay. Add in the fact that the game runs at a slower rate (30fps rather than 60fps) than it does on the other two HD consoles, and it feels more like a quick and easy port than a genuine attempt to bring the definitive basketball game to the Wii U, even if it remains completely playable.

There’s nothing whatsoever wrong with NBA 2K13. In fact, it is a well-presented game with some really engaging features – especially if you have got a good Internet connection. It is just so inaccessible that the only players that will get anything out of this are genuine basketball players. That might sound like the right target market for a basketball game, and perhaps it is, but the real king of the sports games is still EA and its games are universally accessible to casual fans of the sport as well as the diehards.