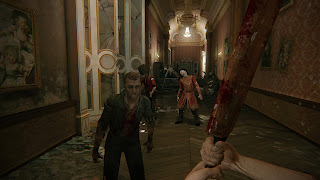 Some interesting behind-the-scenes news regarding the development of ZombiU emerged recently. According to a story on VG24/7, co-operative play had initially been planned for the Wii U’s breakaway third party exclusive.

In the story ZombiU producer, Guillaume Brunier, said “we did [consider co-op play], but we ruled it out quickly as we thought we could not deliver it on time. How to bring a cooperative experience and still keep fear and tension is a question we would love to address though.”

But here’s the thing; I don’t think that it is possible to bring a co-op experience and keep the fear and tension into a game. As much as I understand the commercial desire to put co-op (or even competitive) play into horror games – multiplayer is what the masses want – it is one of those compromises that means that the purity of the genre is weakened in order to sell more copies to more people.

Let me explain. Horror is a genre in which much of the atmosphere (in other words, the fear) is only effective if the protagonists are alone; for fear to work it needs to play into a very base fear that humans feel on a very primitive level – we fear to be alone.

Humans, on a biological level, understand that there is strength in numbers. As primitives we hunted in packs. In modern society it translated into the development of communes, and then towns, cities and finally the metropolises that many flock to in the modern era. By ourselves we are typically weaker than the other stuff out there that can kill us, and we know it. That’s why modern military learn how to operate in units, whereas in the ancient eras of warfare people would train for individual strength.

So biologically we are built to be less vulnerable (and therefore frightened) when we work in groups.

It’s a primitive urge that horror authors have played on since the dawn of the genre. Dracula (the novel) is never more frightening than those sequences when Jonathan Harker is trapped, alone, in the castle with the vampire. The second half of the novel loses most of its fear as Harker teams up with a bunch of vampire hunters and the novel culminates in an action-scene chase scene.

Later, H.P Lovecraft would modernise the horror genre and bring into popular culture the idea of alien monsters destroying humans both body and mind. In almost every case in Lovecraft’s novels the ‘hero’ is isolated and alone – driven insane as much by his own imagination and the lack of psychological support as the horrors he witnesses.

Even the slasher film genre creates the tension for those jump scares by isolating the victims one-by-one. Why? Because the moment you put a group of humans together they’re able to work together to take down the beast, and he simply becomes a narrative obstacle.

The common thread here is the isolation, and the loneliness and feeling of powerlessness that that comes with. Early horror games “got” that. Early Resident Evil games took every opportunity possible to split the humans up. Silent Hills games quite literally plonked players down as the only living human in a ghost realm. The only time horror games added a second character – much less a second player – into the mix was when that second player was even weaker than the “hero”. Consider Fatal Frame 2 where the player is responsible with protecting a (literally) lame sister. The hero herself has no support whatsoever.

But then multiplayer became a marketable feature of games in general, and the franchises of the big horror games became money-spinners. Capcom, for instance, has such high sales expectations for the Resident Evil games to justify their development that it can’t possibly risk actually scaring the player – that would mean some players with weaker constitutions return it to the shop.

And so bringing multiplayer into the big-budget examples of the genre was an inevitability. Suddenly players had a buddy to rely on to watch your back. You could make jokes over voice chat to relieve the tension, or make fun of the ugly beast that you know you share the resources to beat. After all – it has to be beatable in single player. It should be a cakewalk in multiplayer.

The entire co-op experience might be good fun – I’m not saying that it’s not entertaining – but it works to reduce (or remove) the horror impact. ZombiU was less hampered by that need to sell copies. As a high-profile launch title its success was going to be modest at best (the Wii U, after all, is not in that many houses around the world yet), but it also meant that Ubisoft could take some risks and build a game that might frighten away some people, because plenty others will overlook its commercial weaknesses just to play a high-profile game on their new console.

Co-op would never have worked. The entire experience of being a solitary survivor in an apocalyptic would would have been instantly destroyed the moment you another guy pretending to beat you over the head with a cricket bat and laughing along with you over voice chat.

For the genre’s sake I hope the smaller indie teams, like those that built Amnesia, continue to ignore the commercial push by Capcom and Konami and, apparently, Ubisoft, to stick other, real, people into the games to ruin what should be a thickly atmospheric experience.