How far does this iOS freebie climb?
Hill Climb Racing is another one of those charming little free downloads that you find scattered about mobile marketplaces that just puts a smile on your face. But, like the majority of these types of games, they run out of gas a little too quickly.
As a fan of the Trials series, Hill Climb Racing was instantly captivating from the first little hill I came across. Instead of a dirt bike though, the game’s main character is a humorous looking older gentleman in an old red pickup truck. Starting out, even a small bump in the side-scrolling 2D levels will find your truck’s suspension bouncing around wildly and it won’t be long before you’ve met a hill that your vehicle doesn’t’ have enough power/traction to climb.
All isn’t lost though, as along your way you’ll collect buck loads of numbered coins, which are the game’s form of currency.  These coins can be spent to either upgrade your current vehicles attributes (e.g. Power, Suspension, Traction, etc.) or to buy new vehicles and levels. Upgrading your vehicles is a necessity that comes with a high cost, yet it’s just this that keeps you coming back for more. Every upgrade makes a significant boost in the vehicle’s performance and the game’s impressive physics effectively accentuate this – heightening your desires to keep the upgrades coming. 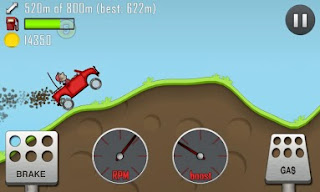 New vehicles include a Monster Truck, Motorbike and even a Dune Buggy styled car, but it was the Monster Truck that I spent the most amount of time with – who doesn’t want to climb massive hills with a Monster Truck? Once fully upgraded, it’s insanely powerful and so much so that if you aren’t careful you’ll outright flip it over from the starting line. Thankfully, a simple control scheme keeps the game manageable and fun to play. A gas and brake pedal is located on either side of the screen – no gyro controls here – and while their uses are self-explanatory, using them while in the air adjusts your vehicle’s pitch for a safe landing. Once you get to the Moon (yes, the Moon) level, you’ll be flying high in its low gravity – flipping multiple times in a single jump for massive coin pay-outs – just don’t jump over the gas cans scattered about, or you’ll find yourself running on empty in no time at all.
Like real-life Motorcycle Hill Climb events, it’s a blast watching the bikes go blazing up the hill, but then they lose traction and things come crashing back down. It’s almost ironic that this game is entitled “Hill Climb Racing,” because this is just what happens here. Once you get the vehicles upgraded and all the tracks unlocked, getting further into the levels starts to feel overly repetitive and with the game lacking Game Center support (leaderboards/achievements), it starts to lack direction too. It’s a shame, because Game Center support would still have me trekking as deeply into each level as I possible can to climb up the leader board ranks, but in its current form, it stalls just short of reaching its true potential.
When the entry fee for a game is only to tap a download button, it’s hard to place too much hurt on it. Hill Climb Racing is an enjoyable little iOS title that offers a good deal of fun for a few hours, yet sadly never reaches the height of the potential that it could achieve. Its bouncy physics and tough terrain are indeed thrilling and worthy of giving a play – it’s just a shame that it runs out of gas so close to the top of the hill.