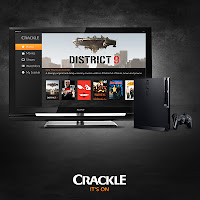 Video on demand service Crackle has re-launched its app for the SEN in a big way, allowing for any Sony Connected Device (like TV’s) to access its library of content.

I’m not a Crackle user, but I think that might have something to do with the fact that I had no idea that the service was free. It’s a surprise to me, but Crackle actually has quite a bit of pretty cool classic and modern television and movie content. And making that content even better is the new deal in place with Sony which opens the service up for anyone with a connected Sony device.

Providing high-quality video streaming, the Crackle App for PlayStation is available to all PS3 users for download. The interface offers a unique experience where users can find content quickly by type or genre; discover featured programming such as Recommended Watchlists; use the PlayStation 3 analog stick for easy navigation when selecting programming, and more. The new app builds on Crackle’s existing presence on the PlayStation Home virtual world.

In all, Crackle has a digital storehouse of over 200 movies and over a thousand TV shows. Everything  you’ll find on the service is uncut, unedited, and (most importantly) free of charge. That’s pretty darned cool. And what’s more, the company says that new stuff is posted monthly, so if you run out of things to watch, more’s on the way my friend.

Here’s a sampling of what’s up for viewing right now for US audiences:

Aside from the PS3 and Sony branded devices, Crackle is also pretty much available on everything you could possibly imagine including Xbox Live, Roku, iOS, Android, Windows Phone, nook Tablet, and Kindle Fire.
Just like the service, the App is free- so go ahead and get to downloading.
Share this