Remember when Sega released Sonic Jump for various mobile devices back in 2005? Possibly not, given that it was released in the more fragmented pre-iOS and Android days of cell phone gaming and never received much of a push. Nonetheless, Sonic Jump will be making its return very shortly (and on a much larger stage).

The gameplay of this new title looks to be mechanically identical its predecessors, albeit with extra features, items, and enhanced visuals. Rather than running horizontally through 2D stages, the blue blur will traverse platforms in vertical fashion whilst stripped of his ability to run. It has oft been compared to fellow iOS title, Doodle Jump.

Sega also released the first screenshot of the game in action. It is worth noting the presence of the Red Star Rings. These rings have functioned as collectibles in past Sonic games, including the recent Sonic Generations and Sonic 4: Episode II. They did not appear in the original Sonic Jump nor its sequel, Sonic Jump 2. 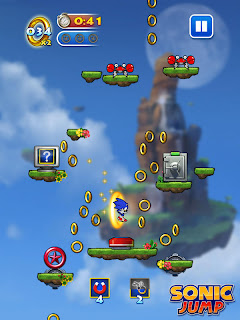 Jump is slated to release on iOS tomorrow on October 18th. Pricing will be £1.49 or $1.99 USD. If you’re interested in a review of the original for comparison’s sake (amusingly published one year ago today), look no further.

Pre-order Cognition, scare up some bonuses