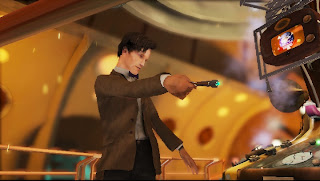 Here’s the problem with taking an idea for a game that is obscenely popular in some parts of the world, but completely unknown in others: when you make that game, you’re going to be doing so on a limited budget.

And that means it’s likely to turn out to be shovelware for the people that actually care about the game. This is precisely the situation Dr Who: The Eternity Clock finds itself in. Like England’s other great exports that our friends in Japan and the US couldn’t care less about (that wonderful sport of cricket, for instance), Dr Who is a game that is made for a very small portion of the global gaming audience. And, just as a cricket game can’t take on the FIFA series as a simulation of a wonderful sport, and Dr Who simply fails to be as compelling as… any other puzzle/ platform game out there.

At a basic level, Dr Who is a 2D buddy-up puzzle platformer. In other words, there are two characters, each with their own abilities, and players need to figure out how to effectively use each character’s abilities to navigate through some puzzling (and occasionally deadly) environments. This formula obviously works and there are plenty of games out there with a similar theme to this one. What lets Dr Who down is the fact that, well, it doesn’t work. It’s glitchy as all hell for a start. Early on in the game I nearly gave up on it completely – there was a time-limited challenge where my characters would not do the thing I wanted them to. Dr Who at one stage needed to use his Sonic Screwdriver to highlight a lock for his companion to shoot. She didn’t shoot it. I got caught, back to the checkpoint. 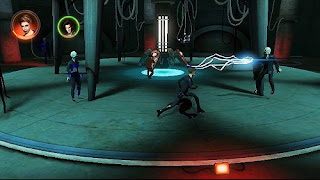 The AI is up there with the worst I have ever seen, and I’ve played a lot of games with bad AI (hi, Resident Evil 5). All of this would have been forgivable if the game was exclusively puzzle-based, but there is just enough action in the game to make the AI and control issues genuinely frustrating. The puzzles themselves control fine and they are the highlight of the game, though this is damning it with faint praise as they’re also completely uninspired and dull.

Now because this is Dr Who (second only to James Bond as a dream role for an actor growing up in a former UK colony), the awkward action sequences and dull puzzle could have still be worth playing through because at the end of the day this is a Dr Who story. Well, that all comes crashing down once you realise that unless you’re an obsessive fan of Dr Who, a whole lot of what goes on is not going to make sense at all. Every line of dialogue, every character and enemy and every item in the game makes no sense in The Eternity Clock unless you’ve learned the back story from the TV series, or for some reason read the Wikipedia. As someone that believes that games should be stand-alone and self explanatory, this is unacceptable, but to again damn the game with faint praise, the limited dialogue was witty enough in the Dr Who style of screenwriting.

So Dr Who joins the sport of cricket as a fine British idea that is absolutely butchered in video game form. By far the worst Vita game yet released. Now every time I boot the game up and hear that awesome theme song, I simply sit there and cry at the wasted opportunity.