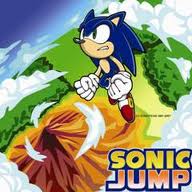 While Sonic the hedgehog has a wealthy library of mainstream hits and misses available for consoles, the blue blur also has quite a few mobile titles under his belt. Perhaps the most well-known (which isn’t saying much, considering their relative obscurity) is Sonic Jump, the most notable of all his mobile outings from the standpoint of ingenuity. While anyone who has ever played Doodle Jump will tell you this is a watered down clone, it’s actually the other way around.  This precursor actually outclasses Doodle Jump in every conceivable way. 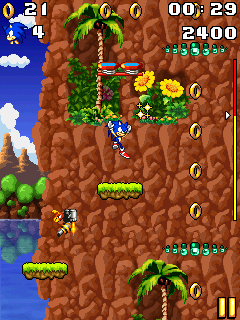 The goal of the game is to complete vertically scrolling stages not by running, but by (you guessed it) jumping. Platforms and enemies are strewn all throughout the stages, as well as rings and various other items from the hedgehog’s past. Sonic automatically jumps, so the player’s job is to steer him rather than tediously press a button to jump every time you land. Should you slip and fall off the stage or get hit by an enemy while holding zero rings (the latter of which is incredibly rare), you’ll lose a life. A game over is decidedly not very penalizing, since you get to start from the level you lost and they aren’t all that long to begin with. If you’ve played the aforementioned Doodle Jump, you’ll know exactly what to expect from the core mechanics.
Sonic can only be manoeuvred left and right, as well as execute a special spin attack for extra jump height.  Your control accuracy will largely vary depending on what model of phone you’re using, but the touch screen controls on my Nokia 5230 are almost always spot-on.
The main difference between the two is that Sonic Jump is divided into six zones, each featuring three stages.  The last level in a zone features a classic boss battle against the old doctor. It’s definitely more engrossing and more accessible to have the game broken up into pieces like this. In a way, it’s superior for pick up and play action. Replay value is also encouraged, since you can run through the stages again to collect all the shards of the chaos emeralds. 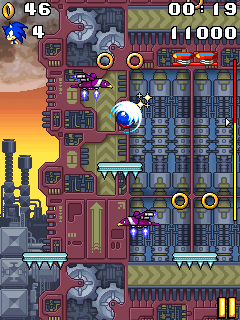 It’s also worth noting that there’s a bit of a story, featuring run-ins from Knuckles and Tails. Naturally these sequences are incredibly short (sometimes two sentences) and rather rare, but it does increase the overall value of the package when everything feels connected.
The graphics are mostly swiped from Sonic’s Game Boy Advance titles, but that’s hardly a detriment when the sprite work is of this quality. Thanks to the visuals, every zone succeeds in feeling different and offers numerous obstacles, even if some of the levels contained within them are similar. Aside from the blatantly obvious and obligatory Green Hill Zone, you’ll see memorable areas like Blue Sky Zone and Mechanical Zone.
Despite the simplistic gameplay, Sonic Jump is more than the sum of its parts. It’s pleasant to have the game divided into stages with unique themes with a story to tie the experience together; there’s genuine incentive to keep pressing onward. If you have access to a mobile device that can play this, don’t pass up the opportunity.
-Clark A.