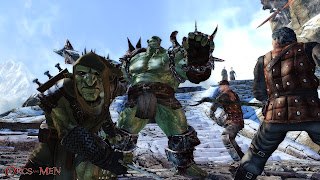 Cyanide is the team that revived Confrontation – one of the finest miniatures games to ever go bankrupt. That was a risk. They picked up the license to Game of Thrones well before the franchise was made cool by the beheading of Sean Bean. Every time I play one of Cyanide’s games I come away with the same impression: these guys are genuine nerds – they all likely grew up playing Dungeon & Dragons and they’re living the dream with making games that they love playing. It’s just unfortunate that they lack the resources to make a truly A-class game.

And Of Orcs and Men is yet another game that is genuine, heartfelt, and quite raw. It’s probably Cyanide’s best realised game, but it’s still distinctively B-grade and for the genre fans only. 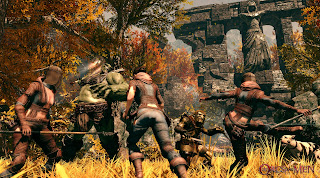 Interestingly this is a new IP for the developers, and the creative freedoms they’ve been allowed by not working on someone else’s license (such as Game of Thrones, Bloodbowl or Confrontation) seems to suit the team well. They’ve peppered this with references to various literature classics, but this is Cyanide’s baby at heart, and I like what I see. The very idea of telling a story from the perspective of the “bad guys” – the Orcs and Goblins of fantasy – while not actually changing the fantasy culture of these species is interesting. The Orcs are still vicious monsters and the Goblins are still the sadistic, grovelling weasels, but now that you’re in control of them and suddenly the genocide they’re subjected to in every other fantasy game starts to seem questionable.

This idea actually stems from a rather clever bit of theatre sports – when you replay a scene from a different character’s perspective, although the character doesn’t change, what does change is how the audience relates to the entire story. It’s a topic that many postmodernists in the performing arts think about in great depth, and it’s nice to see the philosophy play out in game form. 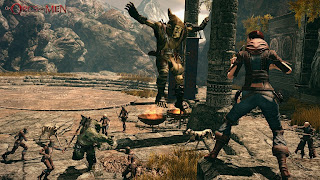 I’m not going to claim that Of Orcs and Men is a work of art, because it’s not, and indeed the game ends up relenting and both the Orc and Goblin become too heroic for the postmodernist theme to stick, but the idea is fleetingly there. The story is very much one of pulp fiction and the writing degenerates into very juvenile places at times (the writer seemed to relish the opportunity to insert swear words into the dialogue, even where it makes no sense to do so), but despite this the concept itself is worth persevering with because you’re never quite sure whether you’re in control of the hero in this game, and that’s intriguing.

Through the game you’re going to be controlling two different characters and the work just like the typical buddy-buddy tropes. The Goblin is sneaky and able to perform stealth assassinations and worm his way into areas that his companion – the thuggish Orc – cannot. But you’ll want the Orc fellow around for the face-to-face scraps. Levels are largely linear, and naturally feature a decent ratio of opportunities to use each character’s special abilities. Both characters level up at a fairly snappy rate and there’s some customisation available through the skill trees. 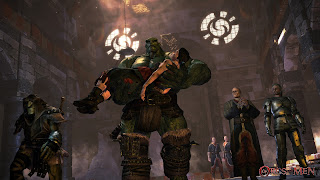 The combat itself does try very hard to be strategic. People who have played Cyanide’s earlier Game of Thrones game will recognise the combat system. Why Orcs and Men has the same system to that game is a bit of a mystery given how it was almost universally panned, but I don’t mind it. By pressing a shoulder button players can temporarily pause the action to “stock” up to four combat commands. Then it’s just a matter of watching the actions play out before issuing some more. It’s very hands-off, and I guess that’s the problem many have with it, but it’s also reasonably strategic, and given that Orcs and Men is not an overly easy game, there’s a nice sense of accomplishment to mastering the system. But yes, people who are used to having direct control over their characters in a game like Skyrim or Kingdoms of Amalur might find this a little disconnected for their tastes.

In terms of presentation it’s clear this is a budget title. The graphical engine is reasonable without being distinctive, and the voice acting is very hit-and-miss. It sounds like a group of kids playing Dungeons & Dragons and imitating Orc and Goblin voices at times. It’s not necessarily a bad thing, but it definitely relegates the game to the “genre fans only” category.

And that’s the thing I like about Cyanide Studios. Its games do appeal to the long-time RPG fans like myself, even as the rough edges frustrate. Just as B-grade fantasy films like Conan are hardly classic films, but there will always be a certain following for them. Of Orcs and Men is, in all fairness, Cyanide’s best recent work, too. Not a classic by any means, but surprisingly entertaining.