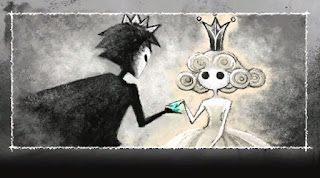 A creepy little skeleton trying to save a shimmering princess – is Dokuro the treat to fill our digital gaming goody bags this Halloween?
GungHo Online Entertainment has crafted a puzzle/platformer that would put a smile on the flesh of Tim Burton’s eerie face and it’s one that Vita owners should be paying attention to. Its recent release on PSN was likely overlooked by many, because of its premium price point of $19.99 USD, but you should know that Dokuro was indeed a full retail release in Japan and inside its digital coffin it’s got the bones (content) to warrant a price tag that doubles its asking price.
Do I have your attention yet? Good, because you should be paying attention by now. See, Dokuro twists the kidnapped princess formula is such a way that it alone is worthy of the game’s admission price. A Dark Lord has kidnapped a majestic princess and has taken it upon himself to force her to take his hand in marriage. But watching from afar, a lowly peon skeleton warrior – so low in fact, that the princess can’t even see him – can’t stomach (err… if he has one) any of it and when the Dark Lord is off dilly-dallying about, the little peon steals the key to her prison cell and escapes with her off into the Dark Lord’s treacherous castle. 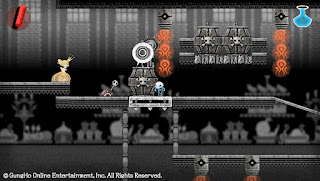 After the hysterical comic book cutscene that the game’s opening starts out with is finished, it’s time to get to work – you’ve got a princess (who can’t see you) to save. Thankfully, she’s a smart lass and she always moves forward in each level on her own, but she is a princess and she’s not going to take one step up or down in height without a man’s hand to guide her.

So, our little peon double jumps around the levels, dodging treacherous contraction of evil, to flip levers and switches to make sure that the princess always has safe, level passage. That is, until he comes across a mysterious potion that temporarily transforms him into a dashing prince, who can sweep the princess up in his arms to whisk her off to, as well as other knightly things, like staving off baddies with his sword.

Dokuro’s gameplay is a balancing act of efficiently utilising the cute little peon skeleton’s jumping abilities (his attack only stuns enemies, unless he knocks them into something lethal (e.g. spikes, flames, you know – the good stuff) and the prince’s sword fighting and carrying abilities. With a tap of the touchscreen, you can transform into the prince at will and even though it’s a time sensitive ability, the transformation potion quickly regenerates when not in use. But the touchscreen has other uses here too and that’s to draw chalk lines. Yes, white chalk can connect two items together when needed; red chalk can be used as a fuse to light explosive barrels to blast down impassable walls and blue chalk is used for (you probably already guessed it) moving water. 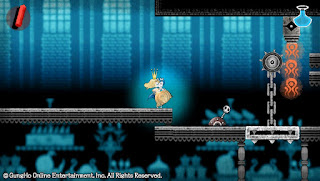 Throughout Dokuro’s fifteen separately themed levels, you’ll find that each level is broken down into ten seamlessly flowing puzzles – only briefly stopping for a few seconds to show your time on each puzzle as the princess kneels down to pick a flower – and the vast majority of the puzzles are built around using only one or two abilities, instead of confusing them all together.

This does a great job of keeping things straightforward, without becoming overly aggravating. That’s not to say they’re easy though, as this is indeed a very difficult game. Some of the toughest puzzles can take ten minutes (or more) of pushing and pulling crates and barrels around, manoeuvring platforms, etc. and one single mishap will send you right back to the start of the puzzle. Just when you think you’re about to call it quits though, you finally figure it out and the next section offers up something wildly different, like holding the princess in your arms while blazing down a moving floor dodging crushing spikes from above, or fighting off one of the awesome bosses, which are puzzle/ platforming battle that have to be witnessed to be understood – much like a child’s candy pale, Dokuro always finds a way to keep you wanting more. 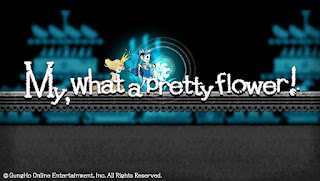 If everything above hasn’t already let you in that Dokuro is indeed a fine Vita title, I’ve saved the best for last. Dokuro’s visuals could be crafted by the hand of Tim Burton himself. Using a chalk/charcoal style, the gritty visuals set the game’s atmosphere perfectly.

Animations are intentionally minimalistic to add to the characters’ whit and the puzzles’ playfields are simply designed. But all of this contrasts perfectly off of the highly detailed backgrounds that feature swirling clouds and spinning windmills, among other eerie and haunting things. It creates a wonderful visual aesthetic that’s only amplified by the creepy piano/orchestral ensemble. It’s not all dark and gloomy though, seeing how the princess’s shimmering gold dress is delightful to behold and when the little peon turns into the prince, those dark backgrounds’ start glowing with brilliant colours. It’s a stark transition, that’s almost poetic in motion and moulds the entire Dokuro package together brilliantly.

PlayStation Vita has been creaking off of store shelves lately, but none of that matters now that Dokuro has creaked its way onto PSN. Just like most every other puzzle game, the frustrations, difficulty and annoyances are present and accounted for, yet Dokuro’s charmingly creative visual style, witty storyline and unique gameplay approaches ensure that it’s a great treat for your Vita this Halloween.