Chances are, your closets are filled with worn-out plastic guitars and drum sets from years past just like ours. The music craze of yesteryear has left us with a lot of extra junk and tons of unused Rock Band songs on our PS3’s hard drives. While Rock Band Blitz won’t have you pulling out all those dusty instruments anytime soon, those extra songs piled into your hard drive come to life like never before and you’ll be proud of your DLC collection once again.
Rock Band Blitz takes the entire Rock Band ensemble and puts them all right into the palm of your hands. If you’ve played Frequency or Amplitude back in the PS2 era, or even Rock Band Unplugged (PSP), then you’ve got a good idea of what’s on offer here. Each different instrument is mapped to its own track onscreen and you can freely swap between the tracks, trying to clear as many notes as possible to achieve the highest possible score. It sounds easy on paper, but even though each track only uses two buttons each, there’s a ton of depth and strategy layered into Blitz.
If you’ve played the earlier era’s music titles, you’ll know that you can ‘clear’ tracks by completing a set amount of notes on it and move on to the next track. Blitz wipes this formula off the table completely and while it might seem confusing at first, it’s actually quite simple to come to grips with. Here, every note played on a track brings it closer to gaining a multiplier. Songs are broken into sections (checkpoints) and if every track has been levelled up when crossing, the level cap rises. The tricky part is that the level cap will only rise in equal parts to the multiplier of your lowest track per checkpoint. This means that if you forget to level one of the tracks when crossing a checkpoint, you’re level cap won’t rise; all that work for nil. But, if you manage to level every track up to its maximum (4x) before crossing, the level cap will raise up four. The potential for 20+ multipliers per track is definitely there – if you’ve got the skills. 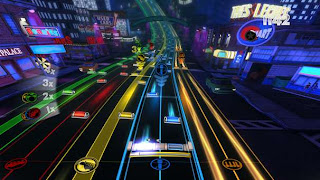 So we’ve got streaming notes and huge multipliers that require strategy – what about power-ups? Well, that’s where Blitz gets really interesting. As you play songs, you’ll gain both Coins and Blitz Cred. Cred is basically XP and unlocks power-ups, and coins are needed to actually use them per song. There are three types of power-ups available: Overdrive, Note and Instrument, and one of each can be used per song; once they’ve been unlocked. Overdrive power-ups are typically used to gain quick score bonuses once enough energy is acquired – still gained from glowing white notes that randomly stream – and come in the likes of rockets and shockwaves. Instrument bonuses are quite simple, as these allow one instrument’s track additional points for the duration of the song. But it’s the Note Power-ups that are the game changer here. Glowing purple notes appear at random and these can activate everything from a running stream of notes that has to be chased down, to a pinball that rapidly accelerates as you bounce it back into play over and again, giving score bonuses for every single note it touches. These power-ups dramatically increase the score and their proper use is the only chance you’ve got of ever achieving a 5-Gold Star score for each song.
Speaking of “songs,” there’s an assortment of 25 songs that come along with Blitz. They’re a scattered lot, ranging from the likes of Maroon 5 to Kool and The Gang, and make for a great mix to get you started. Chances are you’ve already got a ton of Rock Band DLC sitting on your hard drive. If not, the entire Rock Band library is also playable with Blitz. That’s a whopping 3,500 tracks and the icing on the cake is that Blitz’s playlist is playable in Rock Band 3 as well. That’s $50 worth of DLC for Blitz’s $15 asking price! Not too shabby, eh? 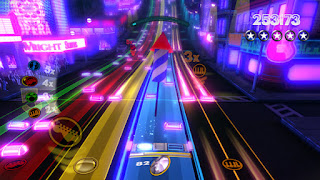 Our one complaint with Blitz is its Facebook connectivity. While it doesn’t spam your Facebook page at all, it does use Facebook to create Score Wars. These “wars” pit your scores against your friends over a set time period. While it works, it seems that challenging your friends on your Friends List would be a better option; leaving Facebook completely out of the equation altogether. Regardless, Blitz is all about getting the highest score possible and whether that’s against the global leaderboards or your friends, the addiction level and fun factor is sky-high.
Needless Facebook connectivity aside, Rock Band Blitz brings back the music genre on home consoles in a fresh new way that’s keeping our fingers so tired we can barely type reviews anymore. This power-up crazed, head bobbin’ tap fest has that “just one more song” appeal that’ll keep you playing until your hands simply can’t take anymore. With the low asking price and DLC compatibility, it’s time to blitz back into the world of Rock Band once again.
– Christopher I.

Dust 514 Beta: leading the FPS race to the bottom