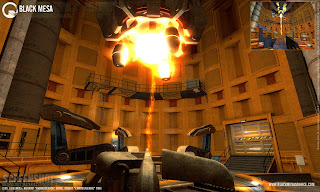 In what may add further proof to the theory that the world does in fact end in 2012, the long-awaited, fan-made, Soure-Engine-powered re-imagining of Half-Life, Black Mesa: Source, will publicly release on September 14th.

Yes, the fan project that has been alive and mysteriously quiet for more than eight years finally has what appears to be an honest-to-god release date! Either that or this forum post by Black Mesa: Source project lead Carlos Montero and the countdown on the official Black Mesa: Source website are one big elaborate hoax created to crush the hopes and dreams of hundreds of thousands of players.

However, there is one exception to this great news; the release candidate will not contain any chapters beyond the Lambda Core chapter. For those who have not memorized all of the Half-Life chapters by now, that means that Xen, Gonarch’s Lair, and Nihilanth will be absent. Depending on your point of view, this may be slightly annoying or this may be a god-send as almost everyone has the opinion that every chapter past Lambda Core has no quality. Also, the release candidate will not contain any of the planned multiplayer modes, but playing Half-Life for the multiplayer is like reading Lord of the Rings for the opportunity to look at words.

For those unaware of Black Mesa: Source, it started as two separate modding projects in the year 2005. Eventually those two projects teamed up as both of their goals was to recreate Half-Life in the Source Engine from scratch. The new project the joined teams started was Black Mesa: Source. From there the story has been a quiet and long one; every so often, the development team has come out of the shadows and stated that the project was not dead but give no further details. Earlier this year we got another confirmation of the projects still ongoing status with the arrival of a Facebook campaign in June. While that campaign has technically failed as it has yet to release any more screenshots, it does not matter as in less than two weeks players will be able to create their own screenshots within the modification itself.