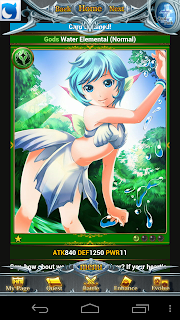 I have had a pair of iPads bouncing around my house for some time, but they are usually in use by other members of my family while on the road, and when I am at the house I generally fire up a game on one of my consoles.  So while I have had some exposure to iOS titles, I generally did not play more than a handful a year.  Well, I recently got an iPhone 4 for the first time, and since that is always with me, I find myself trying out and playing more games on it than I ever did with the iPad.

One such game that has had me hooked is Rage of Bahamut, a collectible card game that is available for both the iPad and the iPhone.

I first heard about Mobage games when I read a handful of articles talking about the upcoming “Transformers Battle” game set to launch this fall.  That title looks to use a very similar structure as that found in Rage of Bahamut, and I tend to enjoy Transformers, CCG’s as well as swords and sorcery fantasy themes, so I finally decided to give it a try.

The first thing to note is that the game itself is free to play.  There are options all over the place to buy cards and items – this is no doubt how Mobage makes their money.  I have talked to several gamers now who have spent quite a bit on playing Rage of Bahamut.  However, my perspective is going to be that of someone who has not spent a cent on either the iPhone or iPad.

At first I expected a battle-style CCG like Magic: The Gathering or another popular iPhone game Shadow Era where you square off with an opponent and strategically lay out your cards and play things out on a turn-by-turn basis.  Turns out that Rage of Bahamut is a completely different beast instead.

Below are the more detailed game mechanics.  If you are not particularly interested in these details, you may want to skip, but for me some of this information may have been useful early on because not all of it was really well detailed in the tutorial.

The game is actually broken up into a handful of fairly simple mini-game components, some of which are player versus player, and others that are a single player experience.  The majority of your time is spent on the ‘Quest’ component.  You are tasked with tapping the screen to strike your opponents down, and each time you expend a certain amount of stamina.  Fairly often, after a handful of quick slayings, you get to open up a chest one a semi-randomized reward.  You cannot lose – you are simply tapping away to progress through the stage – your only real challenge is that your stamina will inevitably run out.  There is a loose storyline tied around your stage progression, and each time you complete a stage you get a stat point.  Each set of stages is wrapped into chapters that lead to the next game component, boss battles.

Boss battles are a fairly simple affair as well.  You can add ‘fellows’ as you gain levels.  Fellows are basically online friends.  Adding a fellow grants you more stat points, and further opportunities to increase friendship points (more on that later).  You can ‘add’ up to three of your fellows to your team for these boss battles (a completely passive process for your fellows – they are there in name only, they do not themselves interact with these brief boss fights.  Their stats are simply added to your cause) then play out automatically as you whack one another back and forth.  Beat the boss and you get a couple of items and access to the next stage.

The stats I mentioned before are broken down into three categories: Stamina, Attack and Defense.  Stamina I have already touched on – that is your resource for continuing through the quest.  Each card you acquire has different levels of attack, defense and sometimes special abilities.  Generally the more powerful the card, the higher the cost in using it.  How do you actually use these cards?  This is where the player versus player aspect kicks in.

You can attack other players, and you can be attacked by other players.  This is where the Attack and Defense stats come into play.  The higher the value of those stats, the more cards you can play (up to five) on offense or defense.  Like Stamina, Attack and Defense get used up in this fashion, and all three stats regenerate over time. 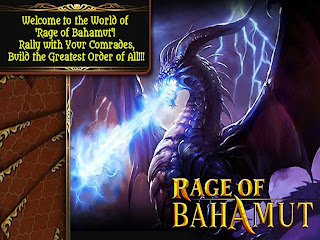 Last week there was a large player versus player event called a Holy War.  You are able to to assemble or join Orders in the game (I called mine Kingdoms of the Lost, after my online MUD).  These orders can then be pitted against one another for an hour at a time, and you are again cast into this role of attack or defend.  The stat points you have obviously allow you to use more powerful cards and more potent combinations of cards, but what about the cards themselves?  So far the game itself sounds fairly simple, right?  Here is where some strategy comes into play.

The cards themselves have a couple of interesting layers of strategy about them.  As you would expect in a CCG, there are normal cards, high normal, rare, high rare and so on.  As a card becomes harder to acquire, it is generally more powerful.  You can use an option called ‘enhance’ – which allows you to essentially feed lesser cards to a preferred one at a cost to improve its level.  Increasing the card’s level means its attack and defense go up.  The maximum level you can gain with a card depends on its rarity.  A normal has a level cap of 20, while a high rare has a cap of 70.

There is also an option called ‘Evolve’.  You can use two lower or equal grades of the same card to evolve into something more powerful.  For example, a Daphne card evolved by another Daphne card becomes a Daphne+.  You can eventually evolve again to a Daphne++ and then one more time for a Divine Tree Daphne.  There is a whole lot of complicated math from here on out, where you can really try to tweak up one or two particular cards or take shortcuts to getting a stronger card faster, but maybe reaching your ceiling faster.  So the strategy has more to do with how you advance your cards, than how you play them during the game itself.  This will probably appeal to fans of card collecting, but might leave strategists wanting more.

And consider this the end of the really detailed gameplay mechanics.

All of this ties into how the game itself tries to monetize.  You can buy Rage Coins which then can be put toward items that replenish your Stamina or Attack.  You can purchase more packs of random cards to help fill out your collection.  From those I have talked to, a fair amount of money does seem to get spent this way.  The question is, can a freebie player compete then?  The answer so far appears to be yes.

I have been playing just over a week now and am at level 42.  Certainly my cards are not as good as some of the other ones out there.  A player with an SS Rare or two in their deck is generally going to beat me, and while there seem to be plenty of people who have paid money for their virtual items, I get the feeling there are plenty of free players just like me out there as well.

Also, there are other opportunities for getting cards built into the game.  You gain friendship points by adding fellows and sending them a message of support once a day.  You can buy packs of cards this way.  You can accrue other forms of currency through the player versus player and events that give you access to cards.  You can do a daily tweet to get some extra in-game currency, and after 10 days you get a rare card.  They even have a referral code process where you can plug in a referral code at the end of the tutorial.  If you do, both you and the person whose code you used get some nice bonuses.  If you are interested, here’s my code that would get you off to a slightly faster start: 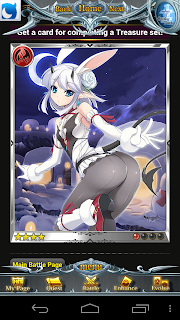 Things like this help Mobage to promote the game while letting you still feel like you can compete.  Those who pay money will have the upper hand, but I do not feel compelled to purchase anything either, which is big for me.  Having had a chance to play it for both iPhone and iPad, both versions play exactly the same, but as you would expect – things do look much better on the iPads larger screen.  Some of the card art is pretty impressive, and the iPhone’s screen just lacks the pop and detail of the iPad in most instances.

Overall I have enjoyed the game quite a bit.  It was not at all what I expected going in, but the ability to grow your cards in various ways and continue to open packs appeals to the RPG and CCG player in me.  Rage of Bahamut has been out for some time, but these addictive qualities mixed with the continued events make it easy to see why it is still such a popular game, while making me curious to see what they will do with their Transformers title in the near future.

It’s a free Gotham on the PC