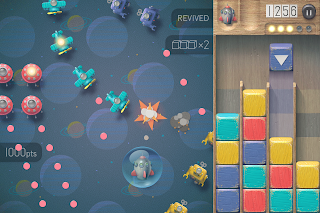 I was worried going in to Toybox, since the game seems to take pride in its inspiration – the ‘game’ of patting your head while rubbing your stomach. My concern was simple – that’s a really, really irritating game to play, unless you’re good at it, in which case it’s a boring parlour trick.

Luckily Toybox is actually more compelling than it sounds. The idea of the game is simple – you’re going to be playing two games at once. On one side is a scrolling shooter. On the other is a basic match-3 puzzler.

You’re playing both simultaneously. On the left hand side your little space ship shoots automatically and you’re responsible for controlling the ship – dodging incoming bullets and destroying enemy crafts. On the right hand side you’ll be lining up three blocks of a single colour to make them disappear.

These two games have subtle effects on one another – clearing sets of blocks powers up the space craft, and the colour of the blocks is linked to the colour of the enemy craft you’re destroying. Losing in either game will result in a game over, so it’s important to keep careful control of both.

On the iPhone, the screen size is uncomfortably small for this game’s ambitions, and the thumbs get in the way of the action often. The game is a more natural fit for the iPad, and it’s there that there’s a compelling, action-heavy experience to be had. The presentation is gorgeous, with heavy use of the soft shapes and bright colours that you would expect to see in a child’s toy box. 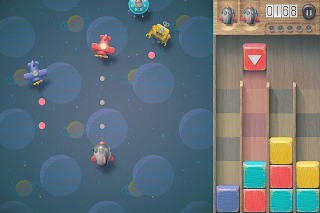 It is worth noting that a side-effect or quirk of this game is that either game in isolation is quite slow paced, to the point where by itself it would be a really dull game. Together the action can get fairly busy, but never quite frantic. When I realised that the match-3 game could be played out of my peripheral vision, and I could concentrate on the more finicky shooter game, Toybox became almost too simple. It’s still a pleasure thanks to that happy presentation, it’s just not as challenging as it initially promised.

The game also plays up the social element heavily. There’s weekly leaderboards, and each high score tells you exactly where you’ve placed on that leaderboard. Just like in the good old days in the arcade, being one of the highest ranked players entitles you to have your initials in the game for the world to see before playing should help encourage people to keep coming back.

I’m a big fan of developers doing something creative on the iOS platform, and Toybox is a surprising little parcel of fun. Well worth a look for anyone who does play iOS games. Plus it’s developed by Australians, so local people; support your industry!