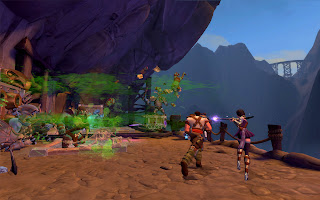 I only played Orcs Must Die! briefly at a friend’s house before, and while I enjoyed the experience, I never picked that title up and played it extensively. The idea was interesting enough – take the tower defense genre and add some third-person combat to the proceedings. The same basic formula is applied in Orcs Must Die! 2, but it is also greatly expanded on.

You still have spawn points as hordes of orcs come rushing out in waves and try to reach an exit point.  Increasingly difficult waves continue to build up over varying numbers of rounds, and if you let too many of them escape before completing the map, you lose. Helping you deal with these hordes are a variety of traps, weapons and trinkets at your disposal. I personally found the arrow walls the most useful, but there is a fairly deep upgrade system in place. Clearing maps and performing well can earn you skulls, which you can later use to buy new items, and also is the currency used to upgrade them. For example, you can take the war mage’s blunderbuss and improve the weapon’s secondary function (the grenade launcher) three times. You can also choose one of two unique characteristics to purchase, such as adding some occasional bleed damage or the ability to sometimes knock back larger opponents. 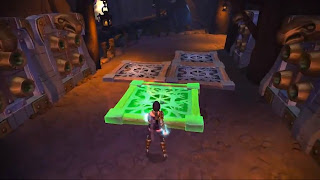 There is a ton of strategy that goes into which weapons suit which maps best – as well as how to best deal with different kinds of creatures. Typical orcs die quickly enough to just about anything, but when you add in things like Trolls or Earth Elementals, you have to consider which traps and tactics work best. Oh, and there are flying units as well. Those caught me unprepared on a few different maps. Luckily, Orcs Must Die! 2 encourages experimentation. You can replay maps over and over again to gather more orc skulls (in-game currency), and there is a free refund option that completely restores all of your skulls to you, so you can build up new combinations of items and try them out to see what suits your style the best.

The number of items is pretty impressive as well. Not all of them are available for purchase and need to be unlocked through the story mode first, but there are quite a few to choose from. This sequel also gives you access to a new character, the sorceress. While there is some overlap in the items she shares with the game’s war mage, there are some unique ones as well that add a lot of replay value to the various maps.
Speaking of replay value, there are also a few different modes to wrangle with. There is the story mode, and also an endless mode (think of it as a never ending horde mode with scaling difficulty) and even content from the original game you can play with the new mechanics. Adding to the value is the multiplayer mode. You can now join up with another orc slayer, and take on wave after wave of horde together. Finding another player was generally easy, and while there was a few small pockets of lag, they were usually brief and rare so the experience did not suffer.
There are also three levels of difficulty you can apply to these different modes. Adding a second person for multiplayer action makes the maps much easier, though you do split a resource pool for setting up traps. The levels often feel set up for multiplayer, where you have to battle hordes of orcs going down different paths at the same time. I have had a few people complain that these maps are way too tough on nightmare, but at least on easy or normal I did not have too much trouble with them. I generally adopted a strategy where I loaded up traps on one path, and personally patrolled the other to kill the orcs the old-fashioned way. 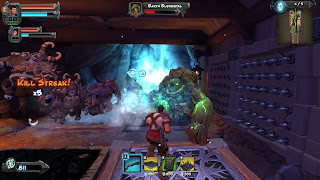 The combat mechanics work well enough. No one is going to mistake this game for a Gears or War or Call of Duty title in terms of precision, and that is fine. Your weapon has a primary function and a secondary. Some functions use up mana, others do not. For example, I can fire away with my blunderbuss for as long as I like, and while there is a brief cooldown between each shot, it does not drain my mana at all. However, using the grenade launcher most certainly does. By contrast, there is a ring of electricity that uses up mana for both its standard and secondary function (these are handled by left and right clicks of the mouse), so while it is more powerful you must manage your mana carefully.
You can assign traps, weapons and trinkets to numeric hotkeys to help speed things up. This can be particularly handy if you are swapping from say, your ring of lightning to a trinket that aids in mana regeneration. Trinkets are handled really well on here as well. You can switch over to it to add a passive ability (like regenerating magic more quickly) or click a button to activate a more powerful ability with a cooldown, like a burst of incredibly rapid mana regeneration. 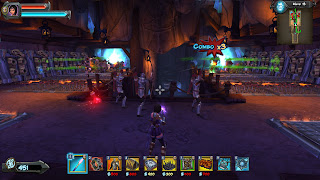 The controls are not perfect. Sometimes if you have too much going on right around you, it can be easy to overcompensate with your mouse and get completely turned around and looking the wrong way.  This can lead to some oddities in combat – especially close range combat – where it feels like you are missing and should not be. This is a bit more pronounced when playing online with someone when a lag pocket hits.
The visuals are decent, in a colorful World of Warcraft kind of way, though they will not give people with powerful graphics cards anything special to show off. The music and sound effects do the job, but neither is really a standout. There is some amusing banter between the sorceress and war mage throughout the story mode, however. There are also some key audio cues the game gives you while you play, to let you know that a certain type of monster or problem is occurring (like when a dwarf falls in combat). That is helpful since there is generally a great deal going on all at once, and it makes the scenario more manageable if you are going it alone.
Orcs Must Die! 2 blends tower defense with enough action and rpg elements to keep the game fresh and exciting. I really like the idea of being down in the trenches, giving you a level of personal involvement often missing in a strict tower defense game where you have an almost omnipotent view of everything, but are removed from the actual carnage. These great mechanics along with the depth of the upgrade system combined with plenty of modes and options more than make up for the somewhat middling technical limits of the video and audio and make this a game that I can easily recommend.