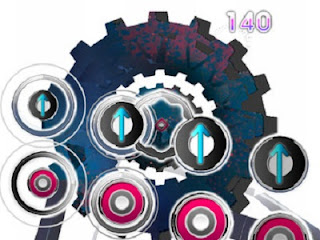 The music rhythm genre has seen a revival in recent years. With the success of titles such as Elite Beat Agents and Audiosurf, it’s no surprise to see developers such as Bit192 Labs begin bringing their games to the iOS, such as Tone Sphere. But in the face of competition such as Groove Coaster and Jukebeat, does it hold up well? The short answer is yes, yes it does.

The concept of the game is rather similar to games such as Elite Beat Agents. You have a metal circle in which a note will pop up and expand within. You then have to tap this target with your finger or hold it down for awhile when it reaches the edge of the circle and the closer it is to the edge, the more points you earn. This will also build up a combo as you go along, which are boosted by +10 every time you hit a silver target. Your performance will then be ranked, based on a 5 star system and results can be submitted to online leaderboards through the Game Center. 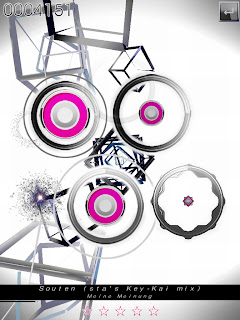 While this it can be fairly easy to begin with on the “1st Episode” (normal difficulty), it’s not exactly a walk in the park on some songs but as you unlock the next episode, the game suddenly presents a serious challenge that’s hard to keep up. It’s certainly a very enjoyable title, one which blends the target tapping well with the rhythm of the music and can get quite addictive very quickly, with replay value certainly boosted by the leaderboards and the game’s ranking system. My only gripe here though is that you can’t pause the game during a song, which would’ve been useful.

For the set of songs, Bit192 Labs have included 20+ songs from a wide variety of artists, with genres ranging from Post Rock, Alternative, Dubstep & Progressive House. While the selection won’t please everyone, any fans of these respective genres will likely enjoy what the title has to offer. Visually the game is also quite appealing, with some impressive 3D graphics and visual tricks, although the colour scheme used in some levels is a bit bland at times.

Overall, Tone Sphere is a worthy challenger amongst the iOS’s rhythm games and a great effort from Bit192 Labs. With appealing visuals, a good selection of music and addictive gameplay, it’s certainly worth the asking price