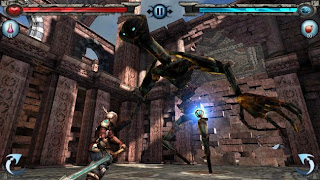 It’s disappointing that so many people continue to insist that the iDevices are incapable of “proper” gaming experiences, because everyone should experience Horn. This is a beautiful, heartfelt game with an AAA-grade art style, and a simple but decidedly entertaining gameplay structure.

There’s a touch of Studio Ghibli about this game. I’m not sure whether it was a deliberate association on the part of developer, Phospor Games, or not, but there’s an ethereal and youthful intelligence about the plot. The creatures that inhabit the world look heavily inspired by Laputa: Castle in the Sky, and there’s a heavy theme of environmentalism that Ghibli so favours.

And while the art style is no patch on the sheer perfection of a Ghibli movie, Horn is one seriously good-looking game. From the flecks of light that dance through the air to the luscious greens and crumbling urban environments Horn will make even the most hardened skeptic forget that they’re playing “just” an iOS game. Technically it might be a polygon or two fewer than the environments of a game like Gravity Rush on the Vita, but in terms of sheer artistry this game is right up there with the best looking handheld games ever designed, and is heads-and-shoulders over any other iOS game – yes, even the detailed-but-generic Infinity Blade 2. 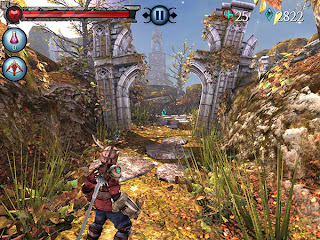 Horn gets ahead of Infinity Blade in terms of its gameplay, too. Where Infinity Blade was a basic point-and-click game with some combat in between, Horn is fully interactive – though the game progresses down a fairly linear path, environments are also fully explorable and there are some neat little secret areas scattered throughout to uncover. Where Infinity Blade was nothing more than a series of combats, Horn splits up the fighting with a couple of environmental puzzles that might not be overly taxing on the brain, but do help to build an environment that feels like a full game rather than something “custom built for iDevices.”

It all controls intuitively, too. There’s no virtual control stick, no virtual buttons. Simply tap where you want to travel or what you want to interact with, and it is done. Very, very occasionally the little hero of the story will get himself stuck on the scenery, but that’s a rare blemish indeed on a game that otherwise controls beautifully without buttons.

Getting on to the combat, it works well too. It’s not as complex as Infinity Blade’s combat system (there’s no parry moves in this one-on-one combat system), but it’s involving enough to last throughout the game’s run time. Each monster has weak spots, so the idea is to dive around the creature until its weak spot is displayed, and then hit them there, hard. Each enemy has different attack patterns to memorise, and the boss battles, especially, are of a truly epic scope. There’s also a weapon forge/ upgrade system to help introduce additional subtleties into the fights. 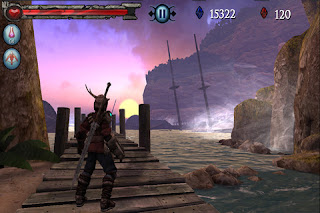 If only it all lasted longer. While Horn is genuinely an AAA-quality iOS exclusive, it is painfully short, and because it’s so linear, once you’ve found the secret areas there isn’t much reason to come back for more. While I’m the kind of guy that does believe in quality over quantity, it’s still disappointing that I finished this game wishing there was more to it than this.

Then again, it’s less than $10. This is a game that would comfortably competitive with the best on the 3DS and Vita at the moment, so for that price, Horn is absolutely essential.