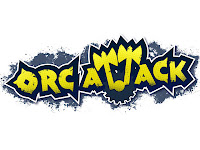 What’s big, green, and (apparently) incredibly flatulent? Take it to the invading human army as a brutish Orc in Orc Attack!

There’s definitely a little role reversal going on in Orc Attack. Developer Casual Brothers newest title casts players as a rampaging and (again) flatulent Orc trying to repel a human conquerors out to harvest the resources of the greenskins homeland.

Orc Attack is a thrilling 3D co-op hack and slash adventure that puts players in control of a team of vile, disgusting Orcs as they embark on a mission to crush human invaders. Already a hit with critics, Orc Attack has won the People’s Choice Award at the Develop Conference held in Brighton in July 2011, and was runner-up as the most promising indie game for 2012 at the Game Connection, held in Paris in December 2011.
Having been crushed and punished by humanity in so many past games, the time has come to let Orcs dish out some punishment of their own against the humans. Players control Orcs with an arsenal of weapons, attacks and devastating flatulence and aim to defeat the evil humans who have come to exploit Orcish lands with a huge army and noisy and dirty machinery. Orc Attack features exciting co-op battles with a revolutionary camera shared by all players, giving an awesome sensation of combat.

The game is shaping up nicely with some big, colorful, and cartoony graphics and *yes* farts aplenty. Orc Attack will also be appearing at PAX Prime in booth #6409  if you’ll be attending the con of cons.

“We are tremendously excited to have Reverb as our publisher, and also to be able to show our work at this year’s PAX Prime,” said Pablo Martin, co-founder and managing director of Casual Brothers. “We’ve got something special with Orc Attack, and we’re thrilled to be able to show off our progress to thousands of gamers at PAX.”

Look for Orc Attack to assault PC, Xbox 360, PS3, and the PS Vita later this year.
Share this