Indy developer Moon Spider Studios has a new hero on the way to consoles and PC in the form of hapless jogger Harold.

Billed as a platform/racing/puzzle game, Harold tasks players with protecting dopey goofball Harold as a guardian angel as he races through some painfully dangerous courses.

Harold is the first title from Moon Spider Studio. The game puts players in the role of a guardian angel tasked with guiding the title character, Harold, through a series of increasingly complicated courses. Harold’s gangly frame and thick glasses make him a long shot to win any of the races and he will need all the help he can get running, jumping and sliding across multi-tiered levels and against challenging opponents. Luckily, being an angel comes with some perks; players will be able to manipulate the environment around Harold in a variety of ways, giving him access to a number of different paths and race advantages, while simultaneously sabotaging the course for Harold’s opponents. 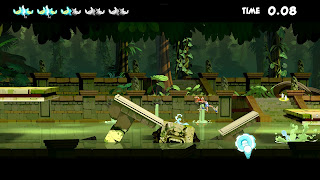 Harold is looking pretty darned good with some nice graphics and animation as well as some very interesting play mechanics:
Look for Harold to fall all over consoles and PC some time next year, but if you’re going to PAX Prime (8/31 to 9/2), you can stop by booth #129 for a sneak peek.
Share this