We reported earlier this year that Square-Enix would be bringing a new title called Final Fantasy Dimensions to the iPhone. It appears that time has finally come, as the game is en route to be released next week on August 31st.

More information on the game has since been made available. Despite its billing, the game is not anything “new” to Japanese audiences, as it takes after several hard to find episodic mobile releases (collectively referred to as Final Fantasy Legends). That’s not to say the game is a mere translation for other audiences, though. The visuals have been improved notably, as you can see in the screenshot comparison below: 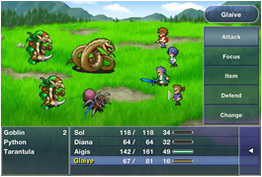 In addition to upgraded graphics and sound, Dimensions boasts a sliding control pad rather than “regular” touch buttons. This feature has made its way into some of the other Final Fantasy iPhone ports as well.
No pricing information is available as of yet, though it may be worth recalling that Square-Enix has historically charged more than the typical 99 cent price point for the series.
For more information, check out the game’s official site.
Share this

Play The Border Lands for free in your browser