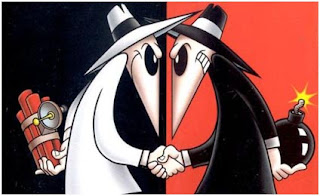 Spy Vs. Spy is a blast right back to my childhood. The antics of white spy and black spy in their comic series (first started in 1961!) never failed to be amusing, and the fact that so many years later it’s still being referenced in shows like The Big Bang Theory just proves how much of a cultural icon the franchise is.

The game adaptation of the comic, first released on the Commodore, original Nintendo Entertainment System (NES) and other primitive consoles, was quite good too back in the day, and captured the feel of the comics wonderfully. Running around a building, collecting objects hidden behind paintings or in draws, and playing bombs and other traps to kill the other spy… it is a simple but compelling formula.

That simplicity has been left intact with the iPad update to the game. It looks gorgeous now (especially after the retina graphics update download), but it plays the same now as it did then. It’s a basic race against the clock to collect a couple of necessary items and reach the exit. But there’s conflict here that comes in the form of a rival spy. He’s going to place traps that will kill you unless you disarm them first. Being killed wastes a few precious seconds while you wait to respawn, and gives him the time to take the lead in the race for the loot. 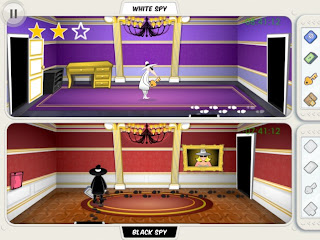 Of course, you can set traps of your own, and knocking out the enemy spy is critical to steal whatever loot he’s accumulated. Aside from the traps, if you run into the same room as one another, it’s possible to pummel the rival to death, but that’s a dreary process compared to the setting of wonderfully nasty traps.

All these years later, that basic formula of Spy Vs Spy remains entertaining. In many ways, it’s the kind of simplicity that works perfectly on iOS platforms, and given the game has hit #1 on the iOS charts, I guess it’s resonating with tablet gamers. Or perhaps people are just nostalgic, because there is one substantial problem with this port that almost ruins the stylish presentation and addictive gameplay.

The controls suck. By default they’re the exact same twitchy “swipe in the direction you want to move” that I found so frustrating in Cthulhu Saves the World. The interface on the screen is also somewhat clunky – there’s too much reaching around the screen to pull up maps or engage in melee combat to be able to hold the iPad comfortably. Couple these together and often as not Spy Vs. Spy is more a struggle with the controls thank the rival spy. 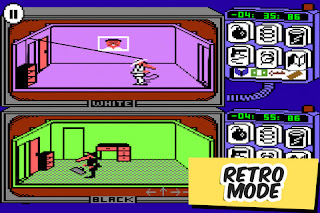 I’m happy to report that Cthulhu Saves the World has been updated to include more traditional virtual buttons. Hopefully Spy Vs Spy also gets a controls/ interface rejig. This is not a game that needs physical buttons to be comfortable to play, but it does need some tweaking.

Despite the control difficulties I genuinely enjoyed my time with this game. It’s easy to pick up and play, which suits the tablet form factor, and the basic action/ strategy elements are genuinely addictive. There’s even the option to play with retro visuals and music for the nostalgic. For a dollar or so? Great value.