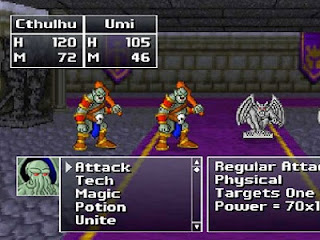 Cthulhu Saves The World is a parody-RPG classic. There is absolutely no denying that. The game is worth buying to support the developer for the promotional video alone. You’ll be able to watch it after the break – I suggest you take the time to do so. You’ll laugh yourself off the chair (well, assuming you’re a fan of Lovecraft).

The game itself holds up pretty well, too, so to be fair it’s not all indie hype. While it’s a parody game, it’s a parody game that remembers that it is a game. Once the combat starts, the humour makes way for some tightly controlled turn-based action.

The game goes out of its way to be friendly to the player, too. Though it’s a 16-bit RPG homage wherever possible, it does away with some of the more off-putting features of the era, such as annoyingly-frequent random encounters, and gives players some control over the fighting. Though it’s possible to do some grinding to smooth your way thought a game, Cthulhu’s combat system features a creative buff/ debuff system that is highly strategic and allows players to punch above their weight when it comes to fighting tough enemies.

And though the game uses retro-themed sprites, it also remains firmly tongue-in-cheek. This is a retro homage that doesn’t require you to be a player on the hunt for a retro kick. It’s not too long, and because it doesn’t take itself too seriously it’s not the kind of game that’s intimidating the new players. So, though the game itself is less memorable than the concept and marketing collateral, it’s a genuinely good time. 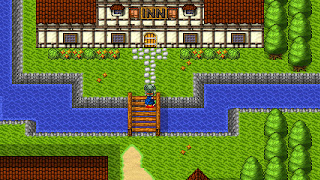 On the PC, at least. The game is a natural fit for the iPad, but it looks like the iPad doesn’t want to be a fit for the game. There’s a glaring problem that makes Cthulhu genuinely irritating to play, and that’s the controls.

On the surface it should have been so easy to do – swipe in a direction to move that way. But, unfortunately, the game is programmed to be far too sensitive – the slightest twitch can turn a wander to the left to take a tour northwards.

Now if the game’s options allowed me to change the controls to a traditional virtual pad, or even better, use the 60beat controller, this would have been fine, but no, the game’s control options offer the default control setup, and a joke about a “mind-control” alternative. Developers – when a joke feels like it’s having a go at the player, it stops being good-natured and becomes quite irritating. 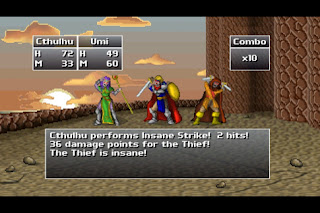 I’m going to be frank here – until this is fixed, or better alternate control options are brought in, this is not a game that is worth investing in – a game that’s meant to be funny shouldn’t be frustrating. The core game underneath is great, as it was on PC, but I have to apologise to anyone who I ever told that controls don’t matter much to an RPG – apparently I was wrong.

I’m going to score this on potential, because I can only assume that in the weeks or months to come there will be some new control options brought in, and I don’t want to mark down a game for a fixable mistake.

But, do make sure you wait a few weeks for that to happen before downloading this game.