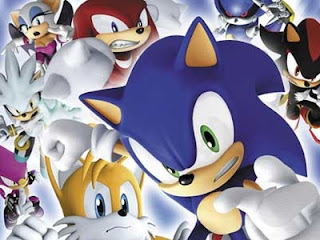 Sonic Rivals was a decent attempt at adding a new twist to classic 2D gameplay, but it ultimately fell a bit flat. Thank goodness for second chances though, right? Surely Sonic Rivals 2 has righted all the wrongs of its predecessor? Nope. While Sonic Rivals 2 indeed repairs some of the first game’s problems, it has to go and introduce new ones in their stead.

It’s particularly disheartening, since the game leaves a good first impression. The fast-paced 2D stages of the last game return with a far more consistent quality level. No longer are there obnoxiously placed bottomless pits and the boost pads are more pleasantly distributed. The rival attacks have also been amended to activate when you collect enough rings, rather than just by picking up an item.
Things start to fall apart when you hit the second level in any given world. New to Rivals 2 are a special sort of rival battle, where you physically attack the character you raced in the previous stage. These sequences may well be the lowlights of the entire game. One potential rival battle has you playing tag and waiting for an obnoxiously long timer to run out while your opponent is “it”. Another one has you targeting your rival head-on and trying to defeat them by hitting them when they’ve got no rings. Both are effortless to fault and purely serve as undesirable padding.
From the other changes are born new quibbles. While the last game was relatively balanced, Rivals 2 throws things out of whack with the perplexing abilities of certain characters. The prime offender is Silver the hedgehog, who uses a skill that alters your physical controls. By the time you figure out what you’re doing, you’ve probably fallen into a pit or progressed backwards. Bizarrely, the computer player even falls for this trickery. Other characters have near-worthless rival powers in comparison, such as Knuckles. His attack is essentially two weak items combined into one, with the actual “attack” part being far briefer than most others. 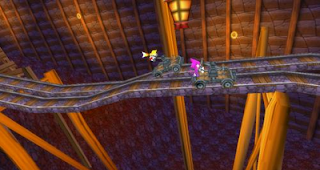 While boss fights were uninspired-yet-decent affairs in the original Rivals game, several of the ones here are genuinely awful. They are often designed in such a way that precision is mandatory…yet you’re always fighting with your rival, causing a stalemate. On the bright side, the artificial intelligence has improved significantly. It’s just a shame that it comes off feeling cheap since the bosses themselves are so poorly executed.
The story mode now has characters split into teams of two. The gameplay isn’t affected at all by this, so it’s largely a presentational thing. In fact, the teammates share the same plotlines and you just swap characters depending on the level. This would be fine in theory, but the game has you select your racer from within the teams and assumes that each character is different enough to justify being singularly selectable. You’re doing almost the exact same thing twice in a row, since you’re forced to play as both team members in each story.
In terms of content, there’s a decent selection once again. One major improvement is made in that challenges are far less monotonous. While you’re playing through the main storylines, you can complete them simultaneously rather than seek them out and repeat things you’ve already done. This means you’ll likely have nearly half of the challenges done just from playing the levels as you would normally. The cards from the original game also return, weighing in at the same 150. They’re still the same in that all they do is function as one more thing for you to collect. There’s also a free-play mode that has you tracking down missing Chao from within the levels. This amounts to little more than paying half-attention to a radar, since they’re hidden in very obvious locations. 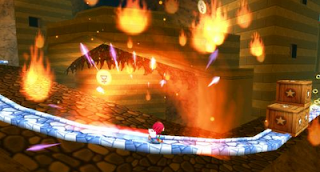 This time around, the game has voice acting for the story sequences. Depending on your preference, this could be either an irritating addition or another area where Rivals 2 dominates its precursor. I personally think of it as an honest attempt to make the banter seem more than throwaway. The soundtrack is as unremarkable as before, composed of some generic but upbeat tracks. I’d love to give them some credit for including the obligatory cheesy lyrical theme song, but it’s not even a minute in length.
For all of these criticisms, the game is still very entertaining at times. It just doesn’t make for a competent sequel when it’s so unpolished. I respect that they’ve doubled the amount of characters and added a proper act structure, but ultimately, the changes pale in the face of the more bothersome ones.
For every issue Sonic Rivals 2 rectifies, it takes a step backwards or introduces something flawed. You know the worst part? If you could magically combine the desirable aspects of both games, it would actually make for a compelling experience. As it is, though, Rivals 2 may be slightly worse than its predecessor.
-Clark A