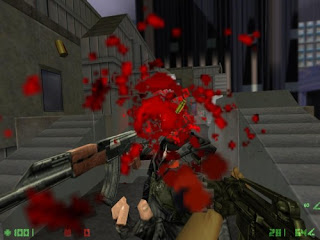 I know this is treading on supremely hot coals (is this to be the first discussion I need to lock down? If after reading this you feel the need to comment, folks, please be civil), but I really feel the need to say this:

Video games are the dominant form of entertainment in the modern world, and the games industry needs to start behaving more responsibly in presenting a full range of philosophical attitudes towards violence.

Now, when I say that, I’m not claiming that games need to be censored, and nor am I claiming that games can compel people to do evil things – to me enough psychologists have failed to find a link between violent games and violent behaviour to convince me that games are no more influential over a sick mind than a movie or a book.

But I would like to highlight how one-note the games industry is right now, as it represents a disturbing trend – it’s not that games influence a person’s thinking, but rather, games are a reflection on an unhealthy social fixation on violence. E3 2012 was actually offensive to a number of critics for the sheer quantity and strength of violence on display. That in itself isn’t really the problem, though. The problem has more to do with this: The games industry is very much one note in its representation of killing.

Can you think of a modern FPS where human skulls don’t quickly become a quest for points (heck, there’s usually an achievement based around headshots)? And one where being really good at bloodletting isn’t rewarded with power-ups and killstreaks? That’s the crux of my concern here – there are very, very few exceptions to the goal of killing for reward in the game’s industry most popular games. A game might not be the trigger to empower someone to pick up a gun and start whaling away on people in real life, but the games industry is representative of social interests – as I said, it’s the dominant form of creative expression – and right now it’s reflecting a very depressing attitude towards violence.

In films and books, there are of course plenty of examples of “violence is glory,” but it is evened out by the likes of Full Metal Jacket, Apocalypse Now and The Hurt Locker – texts that are designed to make us question whether violence really is glory. The games industry hasn’t got that balancing force yet, and so it leaves me a little cold; without the questions we can’t possibly affirm whether we’re doing the right thing.

Instead of raising the moral questions, game developers are more focused on getting those gun physics “just right,” or finely tuning the 72-level unlock progress. We’re trained not to think of the people-looking digital avatars as people, but rather as moving archery targets, thereby dehumanising the entire experience.

In almost universally rewarding aggression and presenting violence as an act that has no consequence, game developers are not encouraging people to behave in that fashion. It’s a losing battle to try and argue games can make people think in a certain way.

But game developers are making these games because people are buying them – there’s a massive appetite for them, and marketing violence means that people like violence. By failing to produce material that makes people question these appetites, I do feel game developers are doing society a disservice, and again, behaving rather irresponsibly for a medium that has the influence to be a source for social education, and not just mob entertainment.