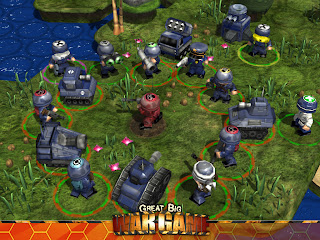 I rather like strategic wargames. A good one feels like the evolution of chess – where carefully positioned units, well timed tactical flanking maneuvers and an intimate understanding of the various effects of terrain can turn the tides against overwhelming odds. And that’s when it’s rather embarrassing for the other guy.

Now, with that said, Great Big War Game is not a strategic wargame. It’s more like Advance Wars, and while it does a great job of being a neat little tactics game, it’s a far cry from the likes of Battle Academy (which sadly remains one of the few worthwhile genuine wargames available on iOS).

The game plays out as standard for tactics games. You’ll start off with a small unit of soldiers, and you’ll need to capture critical resource points to be able to generate more soldiers, and then it’s off to slaughter the enemy. There’s a range of units available for us, and for the most part anyone who has played a tactics game will recognise them – Engineers, grunt soldiers, snipers, armoured transport cars and tanks, all present and behave as you would expect them to. 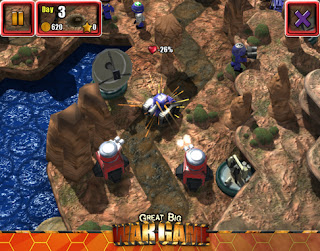 All this is held together by a story that is at times vaguely sexist or otherwise filled with juvenile—offensive funnies. Skipping through the story though and there’s quite a bit of meat and challenge to the campaign, which should keep people playing even as they groan over the cut scenes.

The presentation is hard to fault, being charmingly and aesthetically clean, if somewhat forgettable. And really, that sums up the whole game. It lacks the breakaway impact of an Advance Wars game, but it manages to be a reasonable approximation of the style, and it’s balanced just right for a game of this genre.

It’s not strategic, though, and I despair that this style of game seems to be the future of wargaming. Standing on a hill will improve range, sure, but what about the demoralising effect that having death rained down from above can have for the guys stuck on the low ground? Where’s the ability to set up ambushes, or send a small force behind enemy lines to disrupt supply lines? 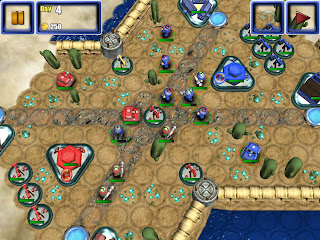 And this displays a real issue I think can be applied to the entire tactics genre: there’s no real room for the come-from-behind win. A halfway competent player will be able to roll over his enemy the moment he enjoys a numerical superiority, as the strategies involved in this game (and most tactics games) doesn’t offer the kind of strategic variety to open up the opportunities for guerrilla warfare and cat-and-mouse trickery that is a strategic necessity to compensate for a lack of firepower.

As a result of that, it really doesn’t matter if you’re battling humans or AI – winning a tactics game is about being patient and not screwing up, rather than being genuinely strategic.

This is something that put me right off Pokemon + Nobunaga’s Ambition, too. “Wargame” means wargame, developers. If you’re going to name your game something, then back it up and meet expectations. I suspect that the reason so many developers try to pass off tactics games as wargames is because the developers assume that gamers are incapable of handling deeper strategy games. This is not true, folks. Give us something real next time, because as entertaining as games like Great Big War Game can be, it’s children’s candy – tasty but hardly the fine dining experience. And ultimately, if you promise us fine dining, and then put children’s candy in front of us, that candy isn’t going to taste half as sweet.