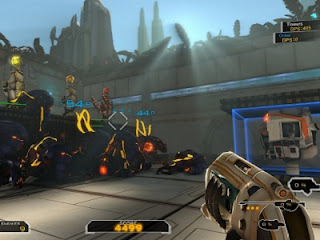 Released over a year ago, Sanctum is still a hard game to describe to a normal video game player without getting a weird look; A combination of a first-person shooter and a tower-defense game that allows four players to create and destroy their own structures on the same map at the same time?

It sounds a bit too good to be executed on a playable level, but Coffee Stains Studios, the developers of Sanctum, found a nice and fun balance between FPS and tower-defense that doesn’t empower a single individual over another. I’ve personally played the game for over 30 hours and I’ve enjoyed every moment. However, Sanctum just got a bit harder to explain in its entirety.

Released today was the free Yogscave DLC map, a (surprisingly generic) map that features a single cave and members of the Yogscast thingamajig saying an assortment of statements that are meant to be funny, but fail because (A): the Yogcast are generally not funny, or (B): because I’m American and I don’t understand foreign humor. At least Coffee Stain Studios didn’t spare any expense on the cave! It’s the entire level!
Sarcasm out of the way, I’m not sure why Coffee Stain Studios took the level in this direction. In the past they’ve shown that they can make much more interesting levels than this one, so was the focus meant to be on the characters? In that case, why is all of the dialog just sound mediocre and unfunny to a non-Yogscast fan, of which I am one? I have no doubt this will please Yogscast fans, but wouldn’t it be better for the Yogscast to team up with the developers/talented modders of some of the games that the Yogscast are more well-known for, such as Minecraft or World Of Warcraft, instead of Sanctum? Either way, this DLC is free and the gameplay of Sanctum is still solid, so I’ll most likely complete this level and see it through to its entirety. Also, I’m noticing an enemy slot in the creature tab that contains lots of question marks…
Along with the free DLC, Sanctum (along with its paid DLC) is 75 per cent off as part of a Steam weekend deal. I highly recommend it, as the game is a great blend of a tower-defense game and an FPS that looks, feels, and sounds fun.
Share this

Game localisation is not all fun and games: An interview with Nyu Media founder, Seon King