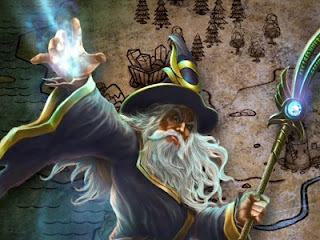 One of the things about being a veteran gamer is that you’ve seen it all before. I’m an old-timer and I’ve seen it all before, although my memory isn’t what it used to be so I could be wrong about that. Either way, there’s a distinct feeling of deja-vu about Warlock: Master of the Arcane. Whether this is good or bad depends on your point of view.

It’s an understatement to say that Warlock resembles Civilization V. The interface and gameplay are so similar that it’s tempting to dismiss Warlock as nothing more than a fantasy-based variation on Sid Meier’s classic. That’s a valid point of view, but it’s not the whole story. Once you’ve gotten your head around the fact that it’s a great game in its own right (and it is) the differences begin to make themselves obvious. In fact – and at the risk of being labelled a heretic – I’d say that there are places where it beats Civilization at its own game.

The setting is the fantasy world of Ardania. It’s the same universe that was used in Paradox’s Majesty series, but the backstory is simple enough that newcomers needn’t be concerned. You assume the role of one of Ardania’s great mages, and it’s your job to prove your worth by defeating all of your rivals and claiming the title of Warlock. After you’ve chosen your avatar, things progress in familiar-enough fashion. Found a city, gather resources and use them to build military units. Explore, expand, meet new and interesting monsters, kill them. It’s possible to win the war by capturing the various Holy Sites in the game world or by researching the all-powerful Unity spell, but that’s really not going to happen. Warlock is all about the fighting. And it does the fighting very, very well indeed. 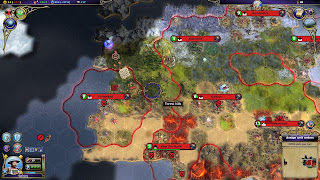 Part of this is down to the level of detail in the game. The world map is vibrant and full of interesting upgrades to collect, and each of the playable races has an enormous set of units that can be produced. Each unit type comes equipped with a unique set of strengths and weaknesses, so strategic army-building is very much a requirement. Your military forces are also packed with character, and it’s hard not to smile when the Stubborn Knights cry ‘hee-haw’ as they ride their war-donkeys into battle, or when your warships are attacked by the cutest sea-monsters ever to appear in a videogame.

Magic also plays its part. Your cities collect mana through various building upgrades, and it’s spent on spells which you can cast directly on the battlefield. Spells need to be unlocked by spending research points and, while the research tree can feel a little too random at times, they really make a difference to the outcome of the battle. 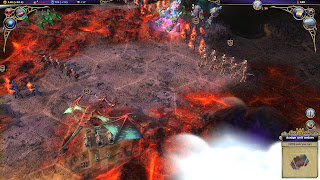 There are a few other subtle points which help to make Warlock stand out. One of my gripes with Civ5 was that, all too often, the game’s outcome was determined by the resources available to your first few cities. That’s not really a problem here; cities develop at a much faster pace, and the various resource-producing structures work well wherever they’re placed. On top of this, unit promotions actually mean something in Warlock. One of the defining moments of my play-through was when I managed to fully upgrade a Black Minotaur, one of the game’s most powerful units. Unfortunately, the ship it was travelling on was sunk shortly afterwards by one of the game’s many wandering monsters. Ardania is beautiful, but she can also be cruel.

As this is a Paradox game, you’d expect there to be a few rough edges. Are you ready for the inevitable list? Here it is: a lack of keyboard shortcuts, no multiplayer at present, limited diplomacy, a scanty manual which omits the much-needed upgrade trees, various tiny bugs, and an interface which repeatedly requires you to select units on the far right of the screen before issuing orders on the far left. These things are all fixable though, and at least they’ll give Paradox something to do while they wait for the glorious Swedish summer to roll around.

So, that’s the alternative point of view. For some, the similarities to Civilization will be so great that it just won’t be enough. Others may find that the relentless focus on fighting doesn’t sustain their interest over the course of a what can be a very long game. For my part, I like it a lot. Now, if you don’t mind, I’m an old-timer and I really must go for my afternoon nap.