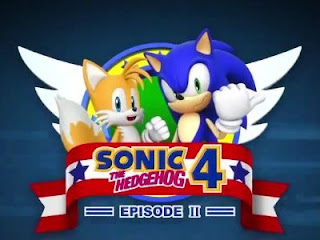 Boy, things can change a lot in a year and a half. When Sega released Sonic the Hedgehog 4: Episode I in 2010, it was a middling effort that felt needlessly derivative and generally rough around the edges. With Episode II, Sega has taken that blueprint, cleansed its problems, and then made it genuinely fresh. Aside from a couple exceptionally confounding design choices, Episode II delivers gratifying action that feels a lot more like “Sonic 4” should.

Beware: as this is an episodic series, I’m going to reference the first game an awful lot.
Sonic’s classic gameplay returns, based off the previous numbered entries from the early 90s. It’s your job to race through various 2D stages at high speeds whilst collecting rings. Rings make Sonic immune to damage from foes and obstacles alike, but getting hit causes him to drop his entire collection. Episode II puts a larger emphasis on intelligent platforming rather than pure speed, however, which is a welcome change. Sonic still has his homing attack, but it’s less invasive and not required for progression in the same way (though it is handy).
Sonic’s physics have also been improved from Episode I significantly. Sonic gains momentum as he should and doesn’t draw as much speed in ball form or cling to walls. They aren’t quite like the original Genesis games, but Sonic Team seems to have struck a balance that should please fans of the old and new. 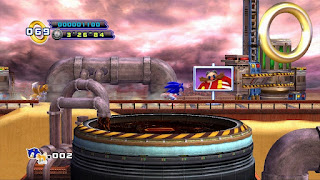 At first glance, Tails looks to be a fairly safe addition without a lot of merit beyond imitating his role in Sonic 2. However, he’s actually mandatory and the source of much gameplay ingenuity. Sonic and Tails have several team moves that are either required or simply useful for level progression. One move allows Sonic to be lifted by Tails and control the flight path for a brief amount of time. Another one causes the two pals to join hands and become a large wrecking ball of sorts, destroying any walls and obstacles in their path. Adding to the novelty is the game’s tendency to introduce new manoeuvres as you play through the stages. While other Sonic titles have thrown in dual character systems with varying degrees of effectiveness, Episode II is one that was built around this scheme successfully. Online play only augments this system further, since you can play through stages with one character as Sonic and the other as Tails.
In terms of stage design, Episode II improves upon its predecessor in the best of ways. Rather than reuse the same grass zones and casino zones that we’ve witnessed in innumerable Sonic titles over the years, Sega chose a blend of less used and genuinely new ideas. There’s a desert with sandstorms, a castle with watery sections, a frozen amusement park, a zone in the sky, and a robotic time-warping planet, all of which are largely untapped concepts in Sonic’s 2D adventures. Adding to the novelty are brand new enemies littered throughout each stage, such as robotic polar bears to fit with the arctic amusement park theme. There are only four “proper” zones again, but the quality of the stage design means you’re far more likely to return and play them. With a grand total of 13 levels and five bosses, you should get some considerable value from this package. 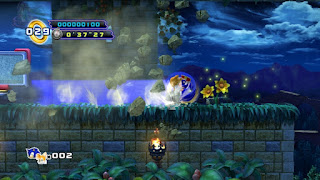 All of the boss battles are new as well, rather than being lazy rehashes “nostalgic throwbacks”. Unfortunately, they’re not always as fun as the amazing new mecha designs would have you believe. The Metal Sonic bouts in particular come off as amateurish, which is a shame considering the rivalry aspect. Still, they’re perfectly playable.
Special stages are reminiscent of the 3D auto-scrolling bonus maps of yore. The bonus levels take place on a half-pipe littered with rings, springs, spikes, and other obstacles. Sonic and Tails need to meet a certain quota of rings at pre-determined intervals. Failing to reach the specified amount throws you out of the stage, but continually nabbing all the rings will reward you with a Chaos Emerald. It’s a fairly good incentive to keep you playing the old stages again, but…
In past outings, you would be treated to an alternate ending or some kind of surprise. This time around, however, there’s no sneak peek at the next episode or really any noticeable difference between the main ending. Granted, Super Sonic is still alive and kicking, but surely some kind of story prize should be available like the classics, especially considering the taunting “Try Again” message?
More disappointing than the Chaos Emeralds are the Red Star Rings. Several of them are hidden in each stage and some will be difficult to find, theoretically promoting replay value. Their existence in the game could be justified if they offered some sort of incentive, but with the emeralds already in the mix, why bother including them if they do nothing? It’s just redundant.
The art direction is about the same as the last game (albeit more noticeable due to the unique stages). It diverts from Sonic’s Genesis days in favour of ol’ green eyes and some cell-shading, but this is still a very attractive game. 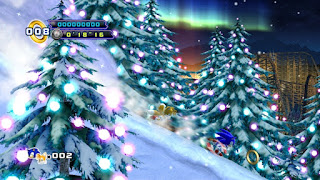 Where Sonic Team really blew it this time was the volume department. Sonic has maintained a tremendous discography throughout his career, even in the games that could have played better. Perhaps to outweigh the highlights of the gameplay, Sonic 4 has a truly confounding soundtrack that feels uninspired at best. The boss battle themes are no better, composed of very brief loops (we’re talking 10 seconds or less here) that can become grating during a longer fight or repeat visits. This could be Sonic’s worst soundtrack to date.
For owners of both episodes on the same console, you’re in for a special treat. Sonic 4: Episode Metal will automatically be unlocked, allowing you to play through new levels as (you guessed it) Metal Sonic. It also serves to tie together the stories of Sonic CD and Sonic 4, in case you were wrapped up in the oh-so-important 2D Sonic continuity.
It’s abundantly clear that Sega wanted to make a sequel with Episode II, not a pseudo-remake or an uninspired mash-up, so in that respect it delivers. Unfortunately, some new niggles were added to the formula along the way. If Sonic Team and Dimps can get these kinks ironed, the theoretical Episode III should be up there with Sonic CD. In the meantime though, Episode II should be compelling enough.
-Clark A