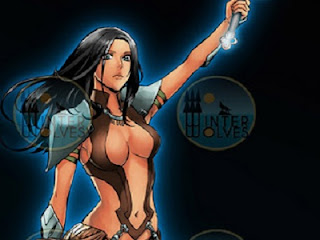 I love any game that opens by asking people if they would like the characters to wear more clothing. Loren the Amazon Princess has romance, costumes that redefine the very idea of skimpy and with that in mind, some rather impressive art. It just doesn’t have an especially great game backing it up.

In essence, Loren is a choose-you-own-adventure storybook, hidden under the facade of a more traditional RPG. The majority of the game is spent reading text, then making a decision based on what is happening around the characters. Some decisions do more harm than good, but it must be said this is not an especially difficult game to get through and there’s not that many diversions away from the main linear plot. It’s possible to move around a world map, but that simply involves clicking on the destination and then occasionally running into a random encounter. 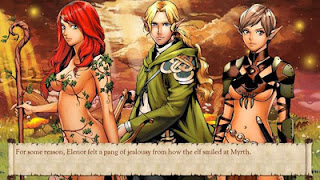 It also doesn’t help that the game is largely free of animation. Aside from some facial animations, Loren relies far too heavily on well-drawn static backdrops and well-drawn luscious bodies to get it through. So Loren is a storybook with pictures, and it would make for a very uninspiring game if it wasn’t generally well-written. There’s a lot of personality and humour to be found throughout the relatively (and thankfully, else it would outstay its welcome) brief running time, even if the romance scenes read a little too much like fanfiction at times. Especially the girl-on-girl romance scenes.

The romance is the only real “game” to be found outside of the combat (I’m getting there), and it, like the skimpy costumes, can be turned off for people with delicate sensibilities. For those that leave it on, every so often there will be a dialogue option that leads to “romance.” Select that often enough and a love heart gauge between the two characters will increase. The interactions become steamier the higher the romance level. Anyone who has played a Dragon Age game (or a Fire Emblem game, only those are generic relationship building exercises rather than romantic) will know the drill. It’s a simpler process here, though, and very little can go wrong once you decide which character will mix with which. 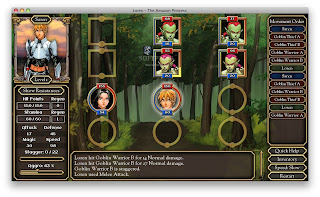 It’s nice the developers did include the option to turn that stuff off so younger people with stricter parents can still play the game, because otherwise it’s very much a family-safe game. Combat is no more than portraits of the hero’s side squared off against portraits of the enemy. When it’s a hero’s turn, select an enemy (or ally, to cast healing magic), select an attack, and off it goes. Some attacks will slow the hero down, meaning it’ll take longer before they can take another turn, and the strategy in this game largely boils down to figuring out the enemy’s weaknesses (not that difficult, as there is a smallish range of abilities to use despite there being an impressively large number of characters to choose between), and then making sure heroes take their turns at the right time.

Because it’s just portraits fighting portraits (again, almost no animation), it’s not an especially inspiring combat system. It’s functional enough and on the high difficulty setting it can even put up a challenge, but it’s just dull after a while. It also jars badly with the rest of the game in the sense that all those skimpy costumes and the romance stuff goes out of the window in combat. It would have made more sense to have characters that are romantically linked provide a greater sense of stat boost or special attacks to give some in-game context to that side of the game. Likewise if you’re going to go to all the effort to dress characters in scraps of cloth, then you’re not really serving your fans to turn the combat into a brawl between face portraits. 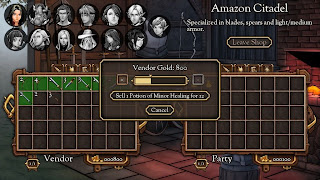 I’m being hard on the game, but Loren the Amazon Princess is a bundle of mixed messages: fun story mixed with awkward romance scenes, amazing, sexy art work let down by a lack of animation and a combat system that feels cheap and out of place with the rest of the game. There’s still fun to be had with this game, but perhaps I’m most disappointed because it could have been a lot more. There’s a whiff of Idea Factory or GUST in this game’s personality, but it’s never quite realised.
– Matt S